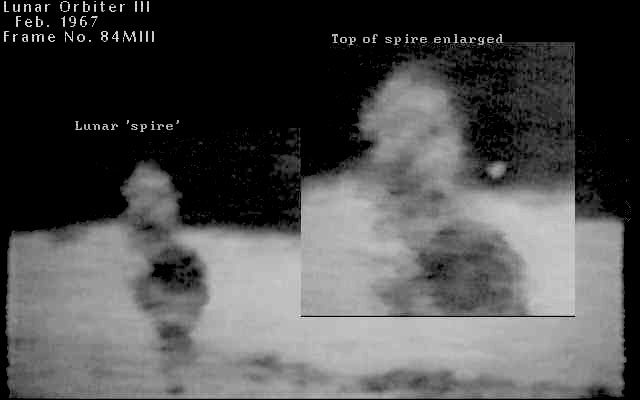 There is also growing evidence that, contrary to what we have been told, the US landed on the moon only to find that someone else had got there before them – and that is why we have never been back to the moon!

The Apollo 10 lunar orbiter photograph AS10-32-4822 and the three sequential photographs AS10-32-4854 – 56 all show two massively tall structures known as the “Tower” and the “Shard” in the southwestern area of Sinus Medii from different angles and different perspectives.

The Shard is a structure which towers above the Moon’s surface by more than a mile. Its overall irregular spindly shape, with constricted nodes and swollen inter-nodes, looks anything but natural. No known natural process can explain the presence of such a structure. Computer enhancement shows an irregular outline with more reflective and less reflective surfaces. The amount of sunlight reflecting from parts of the Shard indicates a composition consistent with crystal, glass or polished metal. Single crystals the size of city blocks are currently unknown. The Shard may be an eroded remnant of an artificial structure made of glass-like material.

The Tower is even more massive than the Shard soaring to more than five miles above the surface of the Moon. It has been photographed from five different angles and two different altitudes (from 30 miles altitude, and from 70 miles altitude at three different distances). In all four photographs the same structure is visible and can be viewed from two different sides. The Tower exists in front of and to the left of the Shard in the Lunar Orbiter III-84M photograph.
The distance from the Tower and the camera is estimated at about 200 miles, while the distance of the Shard beyond the Tower is estimated at about 230 miles. The top of the Tower has a very ordered cubic geometry, and appears to be composed of regular cubes (similar in size) joined together to form a very large cube with an estimated width of over one mile. There is apparent damage to the outline and surface of this structure. A narrow columnar structure appears to connect this cube with the surface of the Moon. The columnar support is at least three to five miles in height. 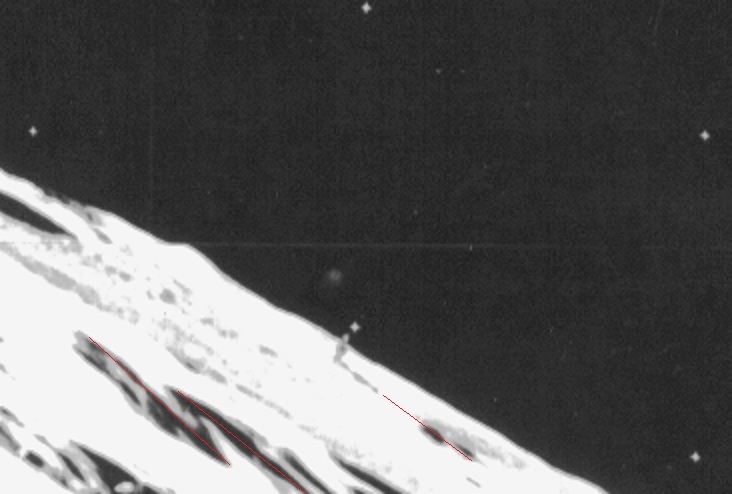 Photographs of strange surface anomalies made the front page of a November 1966 edition of The Washington Post. NASA Lunar Orbiter 2 had photographed what appeared to be six or seven towers, arranged in a specific geometric pattern, in the Mare Tranquilis region of the moon.
Their pointed shadows indicated that they were either conical or pyramid-shaped. One of the apparent towers measured over 200 metres in height. NASA countered that the photographs did not show anything of any interest… whatsoever. The Russian magazine Argosy published comments made by Russian space scientist Alexander Abromov. He stated that the Russian Luna 9 probe had, on landing on the Moon on the 4th February 1966, taken some strange looking photographs: structures that stood in the landscape in a distinct pattern. The tops of the structures appeared to have a profile similar to a pyramidion.