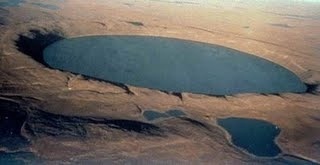 There is evidence that the Rama empire (now India) was devastated by nuclear war.

Scientists are investigating the site, where a housing development was being built. For some time it has been established that there is a very high rate of birth defects and cancer in the area under construction.

The levels of radiation there have registered so high on investigators’ gauges that the Indian government has now cordoned off the region. Scientists have unearthed an ancient city where evidence shows an atomic blast dating back thousands of years, from 8,000 to 12,000 years, destroyed most of the buildings and probably a half-million people.

One researcher estimates that the nuclear bomb used was about the size of the ones dropped on Japan in 1945. Another curious sign of an ancient nuclear war in India is a giant crater near Bombay (above).

The nearly circular 2,154-metre-diameter Lonar crater, located 400 kilometres northeast of Mumbai and aged at less than 50,000 years old, could be related to nuclear warfare of antiquity. No trace of any meteoric material, etc., has been found at the site or in the vicinity, and this is the world’s only known “impact” crater in basalt. Indications of great shock (from a pressure exceeding 600,000 atmospheres) and intense, abrupt heat (indicated by basalt glass spherules) can be ascertained from the site. -Ajithkuma