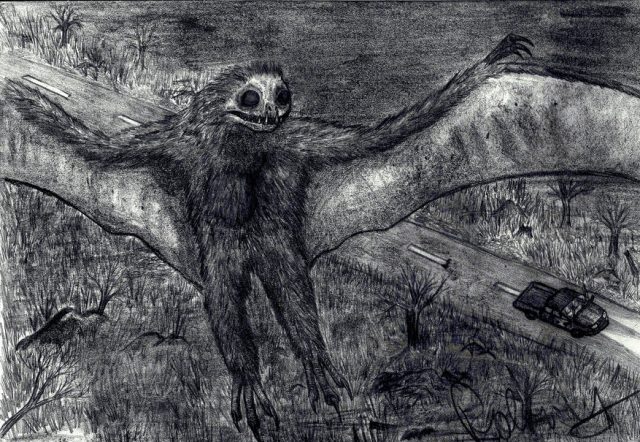 The tale of the Mothman begins back in the 1960s in Point Pleasant, West Virginia, where over the course of 13 months it allegedly appeared to multiple people and even heralded the fatal collapse of the city’s Silver Bridge in 1967. The story’s paranormal connections were popularized in a book called The Mothman Prophecies.

There is a common belief that Mothman is associated with disaster. Whenever there is any big disaster, Mothman has been sighted by someone or other. Like before collapse of the Silver Bridge or even before 9/11 disaster Mothman sightings have been claimed by a number of people.

Sightings of another Mothman have now been reported in Chicago,

It was a normal summer night for John Amitrano, working a Friday shift as security for Chicago’s popular Logan Square hangout The Owl—but when we went outside, he saw something odd. “I saw a plane flying, but also something moving really awkwardly under it,” he told VICE. “It didn’t look like a bat so much as what illustrations of pterodactyls look like, with the slenderness of its head and its wing shape. I know what birds and what bats look like. This thing didn’t have any feathers or fur, and it didn’t fly like anything I’ve ever seen.”

Amitrano added that the thing he saw—which, according to him, had muscular legs, a jutting tailbone, and a human-like shape—flew in a “strange swooping motion, undulating up and down.”

What Amitrano saw that night was one of 55 reported Chicago-area sightings of a flying humanoid in late 2017. The sightings have intensified in 2018.