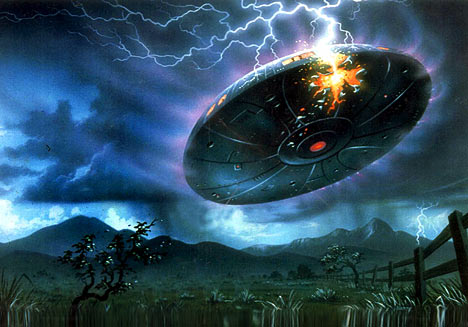 Here are some of the most plausible alien encounters to date.

In 1492, as Christopher Columbus sailed across the sea on the Santa Maria in search of America, he witnessed an unidentified flying object zooming around the night’s sky. As he stood on deck, he saw “a light glimmering at a great distance”. He recorded in his captain’s log that it vanished and reappeared throughout the night, flying up, down, east and west “in sudden and passing gleams”. Columbus was around before the idea of UFOs even existed – it’s unlikely he decided to make this up. But could he have just seen a shooting star? Perhaps, but what kind of shooting star moves all around the night’s sky at high speed, vanishes, reappears and then disappears again into the sea?

The Abduction of Betty and Barney Hill

Generally considered the first ever abduction story, Betty and Barney Hill’s encounter was taken so seriously that scientists and investigators interrogated the couple under hypnosis on more than one occasion.

As Betty and Barney drove home to New Hampshire in 1961 from a holiday in Canada, they noticed a UFO in the sky that eventually got so close to them that Barney stopped the car and got out. The UFO began to move erratically around the sky. Barney got scared and ran back to his car and the couple sped off away from the lights which seemed to vanish behind them.

Strangely though, as if they’d been teleported without realising it, Barney noticed they’d travelled around 35 miles from where they were, in just two minutes. A few days later Betty began having bizarre nightmares of tall alien beings performing horrible operations on her and her husband inside the craft. Eventually, at the request of an Airforce Intelligence Officer, the Hills sought out a professional psychiatrist. After six months of repressive hypnosis, Dr Benjamin Simon stated that he believed the Hills most definitely were abducted by aliens

Betty had by now also drawn up a star map which she claimed the aliens had shown to her. Scientists couldn’t match it to any existing constellations at the time. But sure enough, eight years later and with more powerful telescopes, scientists claimed to have found a constellation that matched Betty’s map. There’s no way she could’ve known about the constellation before hand.

With psychiatrist reports stating they were telling the truth, intense interest from the US Airforce and a star map of a far away constellation drawn from memory, it seems that maybe the Hills actually were beamed up by little green men that night.

The Battle of Los Angeles

Less than three months after America joined World War II, an aircraft was detected above Los Angeles in February 1942. The military was immediately scrambled, firing hundreds of rounds of ammunition from ground to air anti-aircraft guns. The US feared it was the Japanese invading to drop bombs on the City of Angels.

Bullets fired all night but the air raid turned out to be a case of “war nerves” according to Navy Secretary Frank Knox in a statement to the press the following day. Knox even said it could’ve been a weather balloon that they’d spent all night firing rounds of hot lead into. (The weather balloon would later become an iconic UFO debunking tool following the Roswell incident.) But later that day a second statement from a Californian official said: “The aircraft which caused the blackout in the Los Angeles area for several hours this a.m. have not been identified” proving, along with a photograph of the air raid that shows several static unexplained lights in the sky that the ground artillery were firing at, that there was in fact something unidentified flying around up there.  full story here