Mudhouse Mansion is a house located in Lancaster, Ohio that is rumored to be haunted. The house has not been officially occupied since the 1930s – although it is suspected that transients have lived in the space since that time.

As is the case with many abandoned properties, there is a great deal of folklore attached to the old house. Residents who live in and around the area will already be familiar with the urban legends that surround the famed Mansion, and despite the fact that the owners of the property have stated that they will prosecute trespassers harshly, Mudhouse Mansion remains a popular location for ‘legend tripping’ (where people go to a supposedly haunted place as a rite of passage/to test their courage).

Mudhouse Mansion was built in the mid-1800s, and around 1920, the house was sold to the Hartman family. In 1930, the then-patriarch of the family died, and although descendants of the Hartman family maintain ownership of the land today, the house itself has been more or less abandoned for the last 80 years.

One of the most popular folk stories linked to the abandoned house concerns an extremely cruel slave owner who lived in the house after the civil war. The slave owner in question apparently treated his slaves like dirt – his cruelty was apparently considered brutal even in an environment where slaves were considered less than human. The slaves were also often locked overnight in the outhouses rather than being allowed to stay in the relative comfort of the main manor.

One of the slaves got sick of the intolerably cruel treatment that he and his fellows were receiving, and decided to take revenge. Night by night, he began digging a tunnel from the outhouse towards the main manor, and eventually he finished the tunnel. On one ominous night, he made his way from the outhouse, through the tunnel, and into the mansion. Once inside the mansion, he slaughtered the slave owner, along with the entire family that lived in the house. Legend has it that the family remains in the house, haunting it to this day.

The story actually continues from there – locals who live around the area tell the tale of a family who eventually ended up buying the house, around the turn of the 19th century. Neighbors at the time saw the family moving in – unloading furniture and moving belongings into the house.

Then something unusual happened. The newly moved in family simply disappeared – neighbors never saw or heard from them again. At first, people thought that the family was just spending all of their time indoors – but as time passed, and no sign was seen of the family, rumors began to spread. One neighbor claimed to see a woman dressed in white, unmoving, just staring out the window on the second floor. Each time the neighbor took a glance, the woman was there – just staring.

After a few more days, the neighbors decided to call the police – and upon arrival, the police were met with a grisly sight. The family of 5 that had moved in just a few days prior – well, they were in the house. But all five of them were hanging from the ceiling, dressed in white. The woman that the neighbor had been seeing – she wasn’t standing at the window. She was hanging from the ceiling.

After this unfortunate incident, the house was abandoned – and nobody has lived at Mudhouse Mansion since.

To this day, there are reports of strange or unnatural things happening in and around the house. A number of people claim to have heard strange sounds emanating from the house, and those who have been brave enough to actually venture into the house have found it empty, despite hearing unsettling noises in and around the premises. 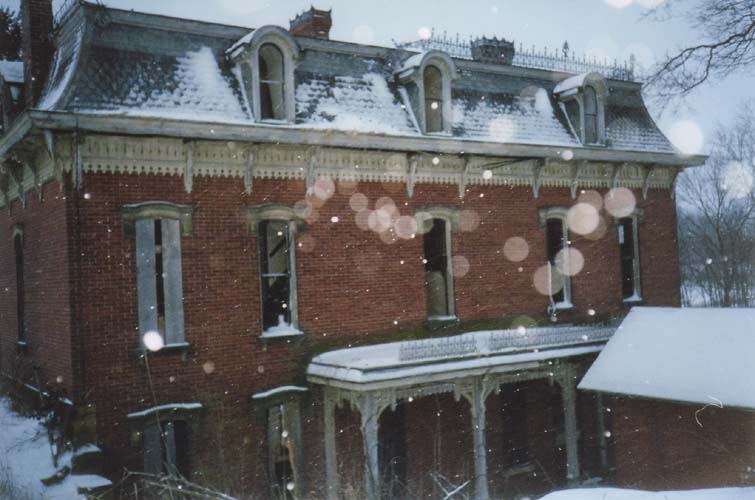 Please note that the current owners of the Mudhouse Mansion are serious about dealing with trespassers. Apparently, not only do they vigorously try to prosecute those who trespass on their land, the owners (the Mast family) apparently even go as far as hiring guards to prevent people from getting onto the premises. Apparently, the police are often called to the house when trespassers are caught, so if this particular haunted mansion intrigues you, and you want to pay it a visit, be sure to be very careful. We don’t encourage anybody to attempt to visit Mudhouse Mansion – if you’re looking to visit an abandoned property that is rumored to be haunted, there are a number of good places across the US that you can go to where you’ll be safe from prosecution (but not from the supernatural).

Another scary rumor attached to Mudhouse Mansion is that the original ‘Bloody Mary’ lived there. At this point, Bloody Mary is linked to almost every single haunted location in the US, so it’s not that surprising. Still, there is a nearby graveyard (Lucas Cemetery) that claims that Mary is buried there, so perhaps there is an inkling of truth in the rumors. For this reason, local children who live in the area sometimes refer to the Mansion as “Mary’s House”

Nowadays, despite the best efforts of the family that owns the land, Mudhouse Mansion remains one of the most well-known ‘haunted’ locations in Ohio. It should definitely be an area of interest for fans of the supernatural, and although we don’t recommend anyone attempt to actually visit the house, if you happen to be in the area, it might be worth trying to get a distant glimpse of the mansion. You may even see a woman dressed in white, staring out the window.