The murder of Sir Harry Oakes is a strange and unexplained mystery.

His Murder still remains unsolved, and the evidence is riddled with mysteries.

The young Harry Oakes was brought up in Sangerville, Maine, USA where he dreamed of becoming a rich man. During his early twenties he attended Syracuse Medical School, but despite his studies he became enthralled with stories about a gold strike in the Klondike. He finally decided to abandon a medical career and fulfil his obsession with gold.

Oakes was twenty three when he departed on an eventful journey that would see him first venture to the Klondike, be shipwrecked off the Alaskan coast, find himself taken prisoner by the Russians, sail to Australia, New Zealand and California and also face death twice from nearly freezing to death in Alaska. Finally, after he made his way to Kirkland Lake, Ontario, here he managed to realise his elusive dream of finding gold.

In 1918, Oakes took the daring decision to mine beneath Kirkland Lake, which was scoffed at by others. However, with the financial support of his mother, the risk paid off handsomely when he discovered more gold than he could have dreamed of.

Oakes’ Lake Shore Mines at Kirkland Lake soon became one of the largest producers of gold in the Western Hemisphere, earning the determined prospector around $60,000 a day.

Soon Oakes was the richest man in Canada, but was also a man who was generous with his newfound wealth. Having neither forgotten his humble beginnings or the help he had received, he gave shares of his mining to friends and family members making them very rich in the process.

A life of luxury

He lived a life of luxury, building a golf course and his own chateau with magnificent views of Lake Shore. But forever restless, Oakes set sail on a world cruise where he met Eunice MacIntyre, an Australian who was twenty years his junior. On 30th June 1923 the couple were married in Sydney, Australia. The union was to bring five children.

Eventually the couple settled on the island of Nassau in the Bahamas for tax purposes. Oakes’ arrival was to precipitate an economic boom for the small island as the millionaire set about building mansions, a gold course, hotel and country club. Despite having a reputation for being a tough negotiator and having a brusque tongue, Oakes was also known for his generosity and philanthropic ways. He not only initiated schemes to tackle poverty on the island, but employed many people as part of his building empire. He even provided a hospital wing and transport for the locals, many of whom worked for him. For these reasons Oakes shocking and brutal death was to be a major blow to many islanders and people who benefited from him.

On 8th July 1943, a rainstorm raged on the small island of Nassau in the Bahamas. It was a night when Oakes was alone, his family having gone away on vacation.

During the night Harry Oakes was brutally slain in his bedroom in a manner that suggested either sadistic ritualism or efforts to conceal any evidence of the murderer or murderers’ activity.

Harold Christie, a close friend of Oakes, who had been sleeping in a guest room next door, was the first to discover the half-charred remains.

The corpse had been saturated with gasoline, along with areas of Oakes’ home and set alight. A partially-burned lacquered Chinese screen near the bed was covered in blood and smudged handprints, while feathers from Oakes’ pillow partially concealed his blackened, heat-blistered body. However, hidden within the congealed blood covering Oakes’ face and head, were four small indentations on the left side of his skull.

Two American detectives were called upon to assist Bahamian law enforcement, but to the dismay of the local police they completely took over the investigation. By evening on the second day of the investigation, 36 hours after Oakes’ body was discovered, they had arrested Oakes’ son-in-law, Count Alfred de Marigny. De Marigny had eloped with and married Oakes’ daughter Nancy in New York previously.

He was committed for trial, and a rope was ordered for his hanging. However, he was acquitted in a trial that lasted several weeks, after the detectives were suspected of fabricating evidence against him. The chief piece of evidence was a fingerprint of his, which Captain Barker claimed had been found on a Chinese screen in Oakes’ bedroom where the body had been found. Later, it was discovered that the print had been lifted from the water glass that de Marigny had used during his questioning by the Miami Police captains, and that de Marigny was being framed. 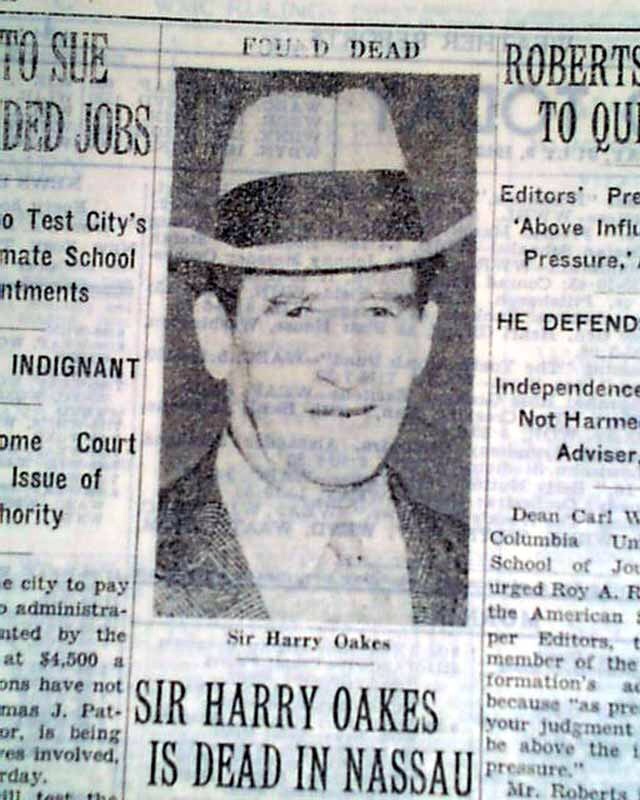 Oakes’ murderer has never been found, and there were no court proceedings in the case after de Marigny’s acquittal.