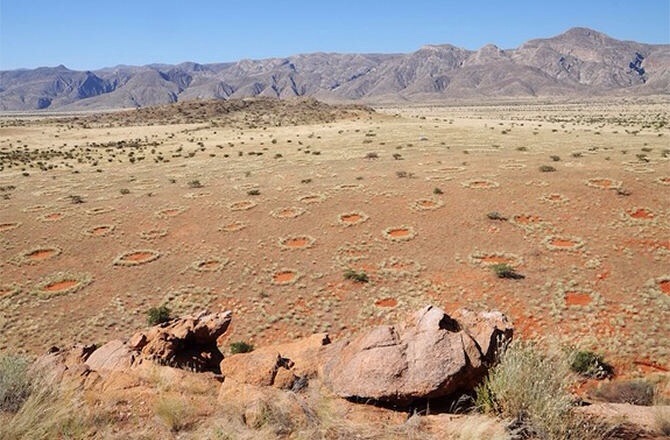 “Fairy circles” that form in the arid grasslands of Namibia have baffled scientists for decades. In the latest attempt to explain the cause of these mysterious circular patches, a group of researchers turned to aerial images.

PLAY VIDEO
Why Are Mysterious Holes Appearing In Sand Dunes?
Sand dunes in the United States are beautiful, but recently they’ve started swallowing people!
DCI
From the aerial images, the scientists discovered that fairy circles are distributed in surprisingly regular patterns, which might rule out the popular theory that termites are the creators.

“The occurrence of such patterning in nature is rather unusual,” study researcher Stephan Getzin, of the Helmholtz Centre for Environmental Research (UFZ) in Leipzig, Germany, said in a statement. “There must be particularly strong regulating forces at work.” (Image Gallery: Amazing ‘Fairy Circles’ of the Namib Desert)

Fairy circles are barren patches, typically surrounded by a ring of thriving vegetation. They can grow to be 65 feet (20 meters) in diameter and can linger for as long as 75 years.

For the past several years, scientists have offered up a variety of hypotheses for why these rings form in the arid grasslands transitioning into the Namib Desert. Their explanations have ranged from grass-killing seeps of hydrocarbons to carnivorous ants to termite feeding patterns.

One biologist recently conducted a census of organisms at fairy circles. His results, detailed in the journal Science last year, revealed a species of sand termite, Psammotermes allocerus, lived at the majority of patches. He concluded that the insects seemed to be feeding on the grass roots, creating the characteristic rings.

Getzin and his colleagues, however, say termites are typically distributed in irregular clusters in the wild; they argue that the insects couldn’t create patterns as consistent as the ones they observed in their aerial photos.

“There is, up to now, not one single piece of evidence demonstrating that social insects are capable of creating homogenously distributed structures on such a large scale,” Getzin said in a statement.

Getzin and colleagues think the most convincing explanation for fairy rings is that the grass grows in self-regulating patterns to deal with competition for water.

The researchers compared the situation to growth trends in forests. In a young forest, plants tend to grow at a relatively close range to one another. But over the years, vegetation thins in a self-regulating process so that mature trees have enough space and resources, the researchers said. Resource competition may similarly drive a self-organized formation of fairy circles.

The findings were detailed in the journal Ecography.