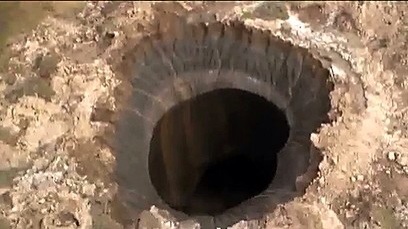 Scientists are scratching their heads about an 80-meter-wide hole recently discovered in a remote part of Siberia called Yamal (which means “end of the world.”)

No one is yet sure what’s caused the hole — a scientific team was traveling to the site Wednesday to investigate. Experts from the Centre for the Study of the Arctic and the Cryosphere Institute of the Russian Academy of Sciences planned to take soil, air and water samples, the Siberian Times reported.

The massive hole resembles a deep sinkhole — it’s not clear how deep yet — but a ring of soil around the edge appears to have been thrown outside of the crater.

Speculation about the cause of the hole includes an underground gas explosion or a meteorite hit or even a UFO attack.

Anna Kurchatova from the Sub-Arctic Scientific Research Centre told the Siberian Times that global warming, which is causing permafrost melting in Siberia, could have released gas trapped in the ice.

A spokesman from Russia’s Emergencies Ministry told the Siberian Times it’s unclear what caused the hole, but ruled out a space rock.

“We can definitely say that it is not a meteorite,” he said.