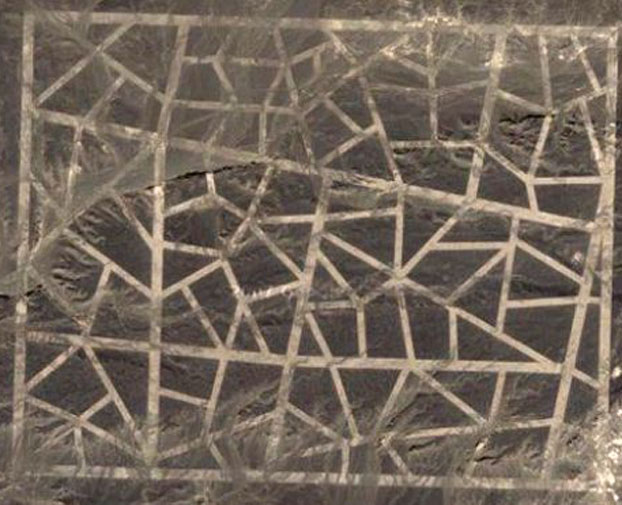 A strange tangle of white lines in the Chinese desert has people scratching their heads and wondering who made them—and why. According to a Gizmodo post “Why Is China Building These Gigantic Structures In the Middle of the Desert?”

New photos have appeared in Google Maps showing unidentified titanic structures in the middle of the Chinese desert. The first one is an intricate network of what appears to be huge metallic stripes. Is this a military experiment? They seem to be wide lines drawn with some white material. Or maybe the dust have been dug by machinery. It’s located in Dunhuang, Jiuquan, Gansu, north of the Shule River, which crosses the Tibetan Plateau to the west into the Kumtag Desert. It covers an area approximately one mile long by more than 3,000 feet wide. The tracks are perfectly executed, and they seem to be designed to be seen from orbit.

In examining this mystery there are a few things that should be cleared up. First of all, contrary to the Gizmodo headline, it’s not clear that the image depicts “structures” at all. Because of the angle at which the image is photographed, the lines may simply be flat, like roads. In fact a close look at the image reveals that the lines appear to have sand blown over them in places, suggesting that they indeed have a smooth surface and are low to the ground.

NEWS: The Ethics of Revealing Secrets

The suggestion that the lines were created to be seen from space is dubious at best. An identical claim is often made for the Nazca lines, in the Atacama desert of Peru. Those lines, also, are sometimes said to have been designed to be seen from space (one favored—and thoroughly discredited—theory was that the lines were created for visiting extraterrestrials).

The widely-repeated claim that the Nazca lines can only be seen from the air is simply not true, as I discovered when visited the Nazca plains in 2006. In fact, many of the lines can be seen from nearby hills and mountains—no airplanes or spacecraft needed.

In both cases, just because the lines can be seen from high above does not mean that they were intended to be seen from orbit. Then there are the wild suggestions that the lines are “perfectly executed” (whatever that means), or “metallic” (because only metal can look white from above?).

So what is the strange set of lines? Theories range from UFO landing strips to top-secret weather-controlling weapons to nuclear testing ranges (people living nearby towns might want to know about this).

At this point no one really knows for sure, but the most likely explanation is that it’s a military target practice range. It is in fact only one of several similar sites in the area, and at least one of the others has airplanes sitting in the center of it. As Paul Marks of New Scientist points out, “Clearly, it is some kind of military target for airstrike or gunnery practice. Another 4 x 4 piece grid some 200 meters across has some pieces clearly blown to smithereens, again supporting the target practice theory, and a dummy runway in garish bluish-white is probably for… air-to-ground strafing practice.”

Of course this explanation won’t sit well with the conspiracy-minded crowd; it’s much more fun to think it’s Chinese equivalent of Area 51 than a boring old target range. 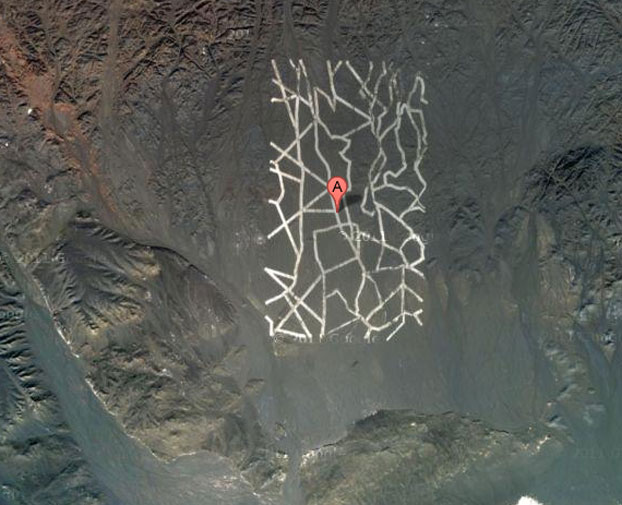 Conspiracy theorists the globe over have been speculating (sometimes very wildly) about what the odd grouping of white lines could be. Suggestions ranging from a military mock-up of Washington DC streets, to an optical calibration field for Chinese spy satellites have been offered. Of course, suggestions of aliens having something to do with it come into play as well.

While the sites in question are interesting discussion fodder, with a little bit of research most of them can be explained rationally. The overarching purpose for the area is military training, according to a former military member who claims to have monitored the area as part of his assignment.

The image above that depicts random roads is exactly that. They are used for artillery drills and practice. A crew can pull up, deploy, and sight-on one of the roads from a distance and work to hit it accurately. It is not an overlay for Washington DC or any other city in the US. In fact, the aforementioned military member said that all training that happens in this area of China takes place in planning for an invasion of Taiwan. If you remember, Taiwan declared its independence from China, which has caused more than a little upset.