THE mystery of how planes and ships have disappeared in the notorious Bermuda Triangle may finally have been solved.

For decades reports of large vessels vanishing without a trace when entering the part of the North Atlantic Ocean have been reported with no explanation.

But now scientists have claimed the giant craters which suddenly appeared in Siberia over the summer may explain the mystery of the Bermuda Triangle.

Conspiracy theorists had alleged the holes were caused by meteorites, stray missiles from the Russian army or even as a result of aliens.

But experts said they were likely caused by explosions from gas hydrates which also may have led to ships and planes disappearing in Bermuda.

Speaking to The Siberian Times, Russian scientist Igor Yeltsov said: “There is a version that the Bermuda Triangle is a consequence of gas hydrates reactions.

“They start to actively decompose with methane ice turning into gas.

“It happens in an avalanche-like way, like a nuclear reaction, producing huge amounts of gas.

“That makes ocean to heat up and ships sink in its waters mixed with a huge proportion of gas.

“The same leads to the air to get supersaturated with methane, which makes the atmosphere extremely turbulent and lead to aircraft crashes.”

They exist in permafrost regions such as northern Siberia, but also under the oceans in some parts of the world.

Three giant craters have been spotted in Siberia’s Yamal and Taymyr peninsulas during recent months. 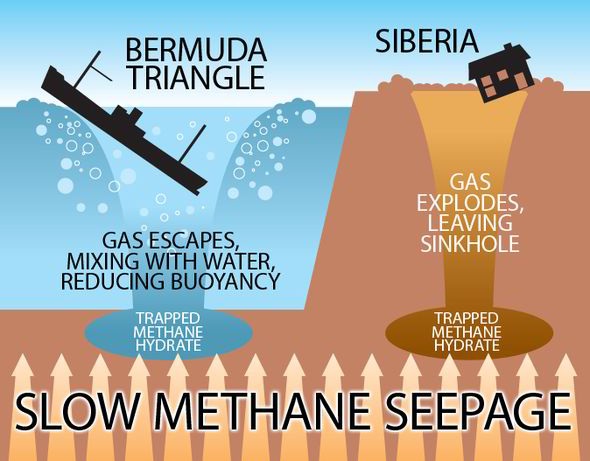 The notorious region stretches from the British Overseas Territory in the North Atlantic Ocean to the Florida coast, to Puerto Rico.

The earliest know allegations of unusual disappearances in the Bermuda Triangle emerged in September 1950.

Among alleged explanations for the phenomenon are UFOs and leftover technology from the mythical lost continent of Atlantis.