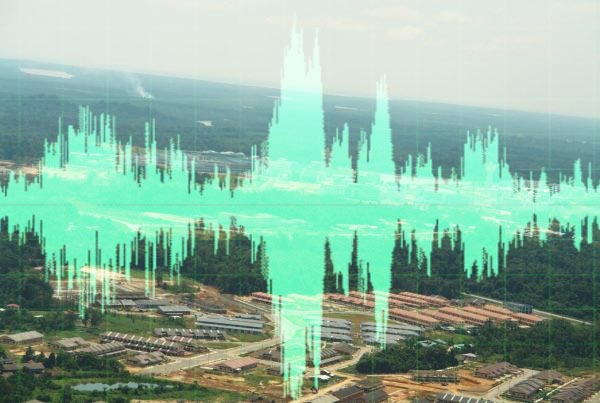 People around the world have reported hearing strange sounds from the skies over the past month. Sometimes they describe it as a hum or low rumble; other times it’s a whine, thump, or even a melody. Often the sounds have been recorded and posted online, fueling rumors and conspiracy theories.

The explanations are almost as varied as the sounds themselves. There’s not a single blanket explanation for all the mysterious sounds, though many have been identified. For example there’s the recent “midnight roar” reported in Malaysia.

There are a few things to keep in mind about these strange, ambient sounds; for one thing, there is virtually no place on the planet where noise pollution is not a problem.  We live in a constant sea of background noise, most of it unnoticed until we start paying attention to all the sounds and focusing on them.

Mysterious sounds are nothing new, of course. The most famous mystery sound in the world is probably the Taos Hum, a low-frequency rumble heard by some residents in Taos, New Mexico since the early 1990s. Not everyone hears it, but the earwitnesses who do variously describe it as sounding like a running refrigerator or a buzzing bee. Researchers have been unable to pinpoint the source of the sound — or even confirm that the hearers are indeed perceiving a specific, identifiable sound.

While the public may assume that locating a sound is easy, it’s not. Identifying the source of a sound is very difficult in urban areas where concrete, glass, and buildings can reflect, change, and amplify sound waves from ordinary sources. Of course it’s more fun to think that the mysterious sounds are part of an alien invasion or secret military experiment than machinery at a local sewage plant.

Upsweep is an unidentified sound that’s existed at least since the Pacific Marine Environmental Laboratory began recording SOSUS—an underwater sound surveillance system with listening stations around the world—in 1991. The sound “consists of a long train of narrow-band upsweeping sounds of several seconds duration each,” the laboratory reports. The source location is difficult to identify, but it’s in the Pacific, around the halfway point between Australia and South America. Upsweep changes with the seasons, becoming loudest in spring and autumn, though it isn’t clear why. The leading theory is that it’s related to volcanic activity.

The Whistle was recorded on July 7, 1997, and only one hydrophone—the underwater microphones used by the National Oceanic and Atmospheric Administration (NOAA)—picked it up. The location is unknown and limited information has made it difficult to speculate on the source.

Bloop is the big kahuna in unexplained sounds. In 1997 (a big year for auditory ocean mysteries), an extremely powerful, ultra-low-frequency sound was detected at various listening stations thousands of miles apart and traced to somewhere west of the southern tip of South America. The sound only lasted about a minute and and was heard repeatedly over the summer, but not since. Bloop is generally believed to be the sound of a massive icequake, but scientists haven’t totally ruled out the possibility that the sound originated from something “organic.”

That’s where things get eerie. If an animal was the source of Bloop, it would have to be larger than a blue whale. The most fanciful of all theories stems from the fact that Bloop’s location is somewhat close to author H.P. Lovecraft’s fictional sunken city of R’lyeh, where the creature known as Cthulhu lies “dead but dreaming.” Cthulhu can best be described as part man, dragon, and octopus, which seems as likely a source as any for the ocean’s greatest aural anomaly.

Julia was recorded on March 1, 1999, lasted for roughly 15 seconds, and was loud enough to be heard by the entire Equatorial Pacific Ocean hydrophone array. An Antarctic iceberg run aground is the leading suspect for its source.

Slow Down was first recorded on May 19, 1997 and is also credited to an iceberg running aground, though some people insist it might be a giant squid. The sound, lasting about seven minutes, gradually decreases in frequency, hence the name “slow down.” Like Upsweep, the sound has been heard periodically since it was initially detected.

The Hum has been recorded on several occasions, mostly during the last 50 years or so. In these cases, there have been reports of a relentless and troubling low-frequency humming noise that can only heard by a certain portion of the population. It’s difficult to pinpoint when instances of the Hum began, but it’s been well-documented since the 1970s, and since then, cases have popped up all over the world—from Ontario, Canada to Taos, New Mexico to Bristol, England to Largs, Scotland and Auckland, New Zealand.

In most instances, the affected group only makes up around 2 percent of the population, but for those individuals, the Hum is largely inescapable and impossible to track. Those affected report never having heard noises before, and say the Hum is generally heard indoors and becomes louder at night. It’s also most common in rural and suburban areas and among people between age 55 and 70.

Scientists have long investigated the cause of the drone, occasionally tracing it to industrial equipment emitting particular frequencies. For the most part, though, the sound has left the world completely puzzled. The list of other possible culprits is long and wide-ranging—wireless communication devices, power or gas lines, electromagnetic radiation, radio waves, or Earth tremors are all suspects. Because the Hum appears and disappears and because the cause may vary from case to case, the phenomenon still baffles researchers. At this point, a few things are clear: The Hum is real and likely a byproduct of 21st-century living.

Skyquakes, or unexplained sonic booms, have been heard around the world for the last 200 years or so, usually near bodies of water. These headscratchers have been reported on the Ganges in India, the East Coast and inland Finger Lakes of the U.S., near the North Sea, and in Australia, Japan, and Italy. The sound—which has been described as mimicking massive thunder or cannon fire—has been chalked up to everything from meteors entering the atmosphere to gas escaping from vents in the Earth’s surface (or the gas exploding after being trapped underwater as a result of biological decay) to earthquakes, military aircraft, underwater caves collapsing, and even a possible byproduct of solar and/or Earth-based magnetic activity.

UVB-76, also known as The Buzzer, has been showing up on shortwave radios for decades. It broadcasts at 4625 kHz and after repeated buzzing noises, a voice occasionally reads numbers and names in Russian. The source and purpose has never been determined.

This animal, also known as the loneliest whale in the world, calls at a highly unusual 52 hertz, well above the normal frequency. Scientists have been listening to 52-Hertz for decades, and recently, filmmakers raised $400,000 on Kickstarter to seek the mammal out. It should be noted that the fundraiser reached its goal through the help of Leonardo DiCaprio, another mysterious beast.