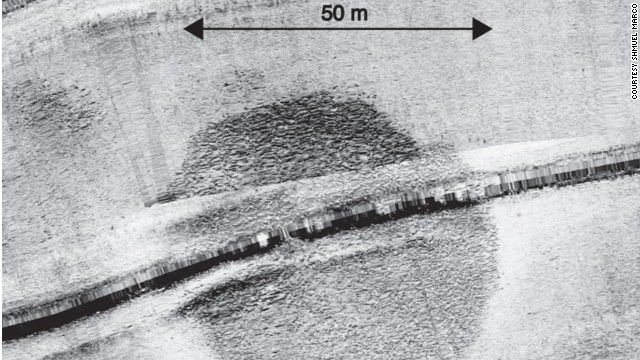 A mysterious, circular structure, with a diameter greater than the length of a Boeing 747 jet, has been discovered submerged about 30 feet (9 meters) underneath the Sea of Galilee in Israel.
Scientists first made the discovery by accident in 2003 using sonar to survey the bottom of the lake but published their findings only recently.

“We just bumped into it,” recalls Shmuel Marco, a geophysicist from Tel Aviv University who worked on the project. “Usually the bottom of the lake is quite smooth. We were surprised to find a large mound. Initially we didn’t realize the importance of this but we consulted with a couple of archaeologists, and they said it looked like an unusually large Bronze Age statue.”

The structure is comprised of basalt rocks, arranged in the shape of a cone. It measures 230 feet (70 meters) at the base of the structure, is 32 feet (10 meters) tall, and weighs an estimated 60,000 tons. It is twice the size of the ancient stone circle at Stonehenge in England.

The exact age of the structure has been difficult to pinpoint, but calculations based on the six to ten feet (two to three meters) of sand that have accumulated over the bottom of the base — sand accumulates an average of one to four millimeters per year — as well as comparisons to other structures in the region, put the estimate anywhere between 2,000 and 12,000 years old.