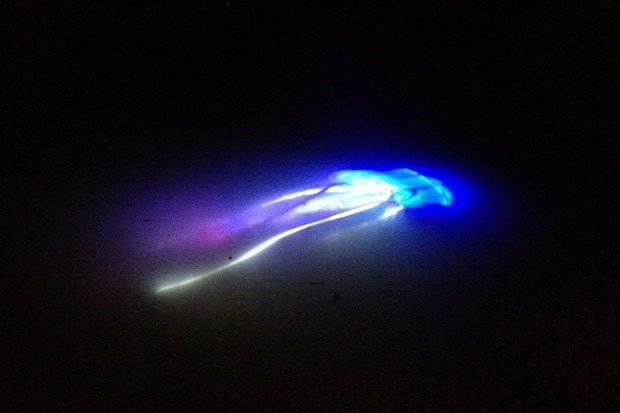 Experts were baffled after video footage emerged of a glowing “alien-like creature” swimming in Bristol harbour.
Stunned eyewitnesses filmed a mystery luminescent, tentacled being, which was flashing a variety of colours, floating close to the top of the water.

Videos of the strange marine object in the city’s historic docks were posted on Youtube and Twitter with many claiming to have seen an alien.

Marine biologists admit they are baffled, but claim the footage could be a marine salp which had drifted off course by the weather.
Dr Steve Simpson, senior lecturer in Biosciences at the University of Exeter, said: “It’s very intriguing, I don’t really know what to make of it.

What could it be?

A rare type of marine salp: these are barrel-shaped marine animals which feed on algae and form into long chains with other salps. They look very primitive, like jellyfishes, but their biological make-up is actually closer to fish and vertebrates.

A jellyfish: there are a huge number of different jellyfish species across the globe, many of which carry luminescent and fluorescent genes

An alien: a number of passers-by who spotted the squid-like creature likened it to a creature from another world

An art installation: some marine biologists are unconvinced the ‘creature’ seen in the harbour was a living thing. The curator of the Bristol Aquarium, Daniel De Castro, said he believed it was “entirely artificial”.

A Banksy work: some people have suggested that Bristol street art legend Banksy might be behind the mystery sighting. Despite conceding it might a marine creature, Dr Steve Simpson, senior lecturer in Biosciences at the University of Exeter, said: “I’m still waiting for Banksy to own up.”

A prank: someone thought it would be entertaining to get tongues wagging about an alien invasion in Bristol but, if it was a prankster, they have done a very professional job. Mr Di Castro said: “It’s really clever the way they’ve done it.”