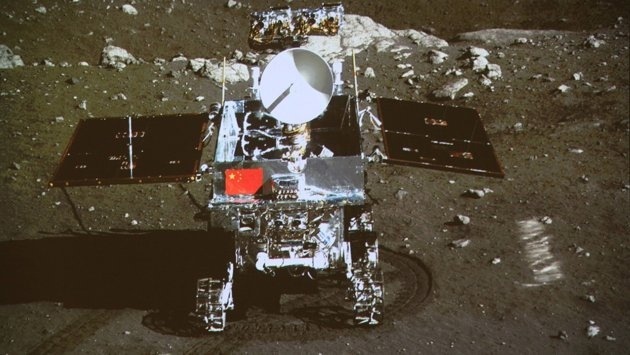 When the Chinese moon rover Jade Rabbit broke down after travelling a mere 60 feet across the moon’s surface, scientists and engineers knew who to blame: aliens.

The government announced that it had fallen victim to extreme cold – but some state-run magazines and TV shows offered another explanation, with the support of some scientists, and even members of the military.

Nigel Watson, author of The Haynes UFO Investigations Manual says that the thousands of Chinese UFO enthusiasts believe that, “it was either nobbled by aliens or the USA. This would be to prevent the robot from discovering bases and other secret technology on the surface of the Moon.”

More UFO sightings have followed – including a “head-sized” ball of light which flew into a house in Qihe County, according to Shandong Qilu radio.

In China, the dictatorial government legalised discussion of the subject in 1979 – and China’s approach is rather different from the West’s. State-run TV stations and newspapers regularly report UFO stories – and take the stories seriously.

Some Chinese UFO societies require members to have a degree-level qualification and published scientific articles before they can join. The Journal of UFO Research was launched with the support of scientists – and had a circulation of 40,000 at its peak, higher than any such publication in the West.

The mysterious “death” of Jade Rabbit has ignited a new wave of UFO frenzy. On some of China’s popular UFO sites, users described an “enormous object” near the moon before Jade Rabbit ceased to function.

Watson says that his own book on UFOs is now to be published in China, as fears over mysterious rover-killing UFOs grip the nation.