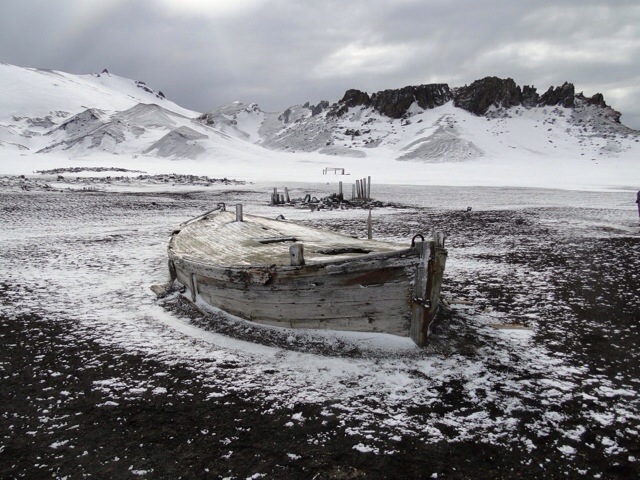 If there is a middle of nowhere, it is Bouvet Island, a 19 square mile piece of land in the South Atlantic, uninhabited and covered by glacial ice. It is the world’s most remote island, nearly 1,000 miles from another swath of land (a sector of Antarctica called Queen Maud Land). The island is 1,400 miles from the nearest inhabited land mass (Tristan da Cunha, another remote island) and 1,600 miles from South Africa — roughly the distance from Paris to Moscow.

Originally discovered in 1739 by Norwegian explorer Jean Baptiste Charles Bouvet de Lozier, the island is a wasteland of rocks and ice, with no vegetation aside from the occasional lichen or moss. From above, it looks like a giant, flattened snowball. Since 1929, it’s been a territory of Norway, and in 1977, an automated weather monitoring station was built on the island. But the island’s biggest oddity came to light in 1964, when a boat was discovered on the island, without explanation.

The South African government, with Norway’s permission, was investigating the construction of a manned station on the island, and in the 1950s set out to see if there was enough flat land space on Bouvet Island to meet their needs. They determined that the terraform did not suit their needs. Also, they found that island had grown, likely due to a volcanic eruption, but the weather conditions did not warrant formal study of the new land mass.

The mystery of Bouvet Island

In April of 1964, they returned to finish their study of the newer parts of the island — and found a mystery. A boat, marooned on the island, with a pair of oars a few hundred yards away, lay in a lagoon within the new land mass. The boat lacked any identifying markings and, although there was some evidence that people were on the boat, no human remains were found.

The open questions are numerous. Why was a boat anywhere near the area — quite literally, in the middle of nowhere? Who was on the boat? How did they get there — over a thousand miles from civilization — with nothing more than a pair of oars? And what happened to the crew? The answers are few and far between, as noted by London historian Mike Dash, who took an in-depth look at the question, but came away with nothing even approaching a concrete answer.

Given the remoteness of Bouvet Island and its inhospitiable landscape, the identity of the boat and its potential crew has gone mostly unexplored for a half-century. Most likely, it will remain that way — one of history’s true unsolved mysteries.