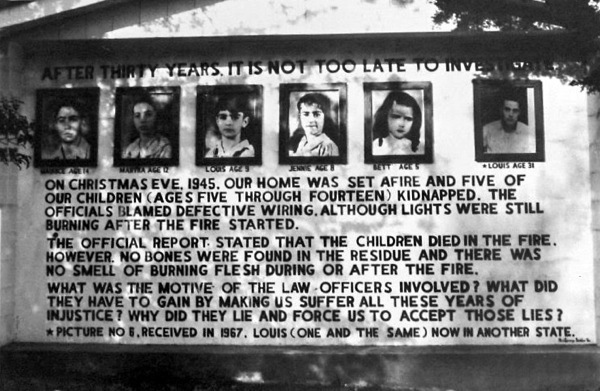 For nearly four decades, anyone driving down Route 16 near Fayetteville, West Virginia, could see a billboard bearing the grainy images of five children, all dark-haired and solemn-eyed, their names and ages—Maurice, 14; Martha 12; Louis, 9; Jennie, 8; Betty, 5—stenciled beneath, along with speculation about what happened to them. Fayetteville was and is a small town, with a main street that doesn’t run longer than a hundred yards, and rumors always played a larger role in the case than evidence; no one even agreed on whether the children were dead or alive. What everyone knew for certain was this: On the night before Christmas 1945, George and Jennie Sodder and nine of their 10 children went to sleep (one son was away in the Army). Around 1 a.m., a fire broke out. George and Jennie and four of their children escaped, but the other five were never seen aga

On Christmas Eve, 1945, the Sodder family home burned down. The cause was traced to defective wiring despite the fact that Christmas tree lights were still on after the fire started. The oldest two sons and daughter and the youngest daughter survived, but the five middle children were missing and no trace of their remains were found. Believing that the fire was a cover for the abduction of their children, George and Jennie Sodder spent a fortune on detectives to investigate.

Several pieces of evidence and eyewitnesses backed up George’s kidnapping belief. In 1968, a photo was mailed to the surviving family; on the back was the message: “Louis Sodder, I love brother, Frankie. Ilil boys A90132 (or 90135)” Detective C.C. Tinsley was hired to investigate the photo and where it came from, but he vanished and was never seen again.

A billboard describing the family mystery was erected near the site of their house. Local law enforcement did not do any investigation into the children’s whereabouts. The coroner’s report declared them legally dead.

George Sodder eventually died in 1969; Jennie in 1988. The billboard now no longer stands.

Suspects: None known, but speculation suggests the kids were abducted by an illegal child-selling agency similar to Georgia Tann’s, with help from the local police. Two months before the fire, the Sodders had an argument with another Fayetteville resident who tried to sell them life insurance. He warned that their house would burn and the children would vanish. He was also a member of the coroner’s jury which ruled the fire accidental.

The rest of the  story

Other amateur sleuths point out that Mr. Sodder had a coal-trucking business. The coal industry was under constant pressure from the Mafia, which may have been involved in the children’s disappearance. “90132” was a postal code for Palermo, Sicily at the time. The Sodders themselves were of Italian descent; the original name was Soddu.

Time passed and George and Jennie and their surviving children continued their search.

Then, in 1968, twenty-three years after the fire, Jennie got an envelope in the mail. It had been mailed from a city in Kentucky. There was no return address. Inside was a photograph of a young man. On the back was written:

Authorities thought it was some kind of cruel hoax, but George and Jennie thought the photograph looked exactly how Louis would have looked as an adult. There were multiple similarities. Once again hopeful, they hired a private investigator to go to the city in Kentucky to track down the photo’s sender and/or the young man himself.

The investigator left West Virginia and was never heard from again.

The 1968 photo was the last possible evidence that ever came to light. George would die in 1969 and Jennie would die twenty years later. They never believed that their five beloved children died in that fire early one Christmas morning.