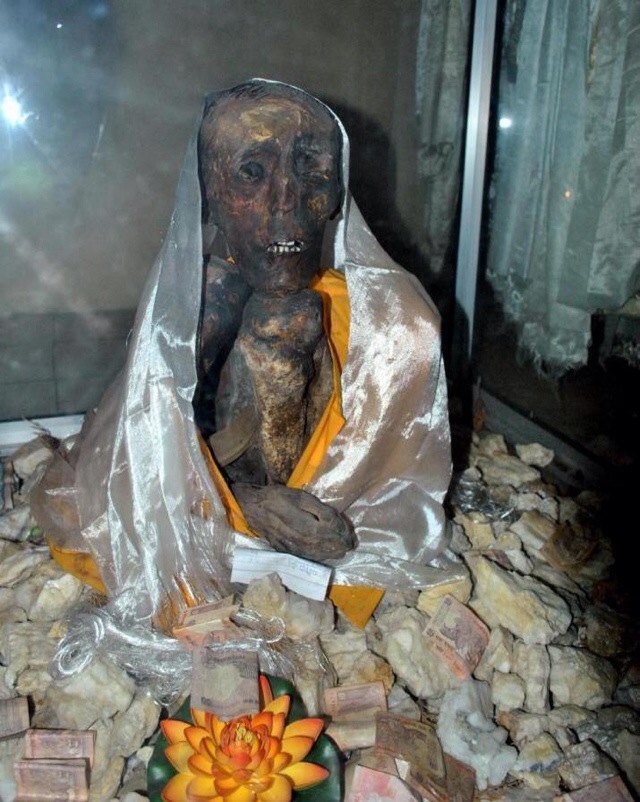 A MUMMY of a Tibetan Buddhist monk, believed to be about 500 years old, has been found in India’s northern Himalayan state of Himachal Pradesh.The mummy, identified as that of monk Sangha Tenzin, was found inside a tomb at Ghuen village in the cold and remote Spiti district of Himachal Pradesh, about 6000 metres above sea level.

In 1975 an earthquake in northern India opened an old tomb containing the mummified body of monk Sangha Tenzin. In 2004, the local police excavated the tomb and removed the mummy. The mummy is remarkably well preserved, with skin intact and hair on his head. He died in the seated position, with a rope around the neck and thighs (an esoteric practice recorded in few Buddhist documents). Victor Mair, a consulting scholar at the University of Pennsylvania, Museum of Archaeology and Anthropology, was quoted as saying the mummy was at least 500 years old. According to the report, the mummy is remarkably well preserved for its age. Its skin is unbroken and there is hair on the head.

The mummy of Sangha Tenzin is now on display in a temple in Gue, two miles from where he was excavated, in the Himachal Pradesh region of India, bordering Tibet. Controlled by the Indo-Tibetan Border Police and isolated in the Himalayas, the town is very difficult to reach. The temple where the mummy rests is open to the public.