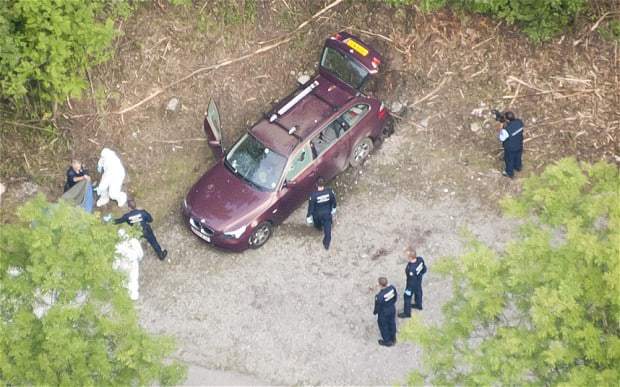 On 5 September 2012, three members of the same family were found murdered inside their car in a remote mountainside lay-by near Lake Annecy in the French Alps. 50-year-old Saad al-Hilli, his wife 47-year-old Iqbal al-Hilli, and her mother 74-year-old Suhaila-al-Allaf were on holiday that autumn in Chevaline near Annecy. Their car was found reversed awkwardly into the corner of the layby with the engine running and still in reverse gear. The car doors, however, were locked.

The al-Hilli’s two young daughters were also found at the scene. A 7-year-old was discovered outside of the car suffering a gunshot wound to her shoulder, along with serious head wounds, and her 4-year-old sister was hiding underneath her mother’s skirt in the footwell of the car. The physically unharmed little girl was so terrified she was initially not found by police investigators when they arrived on the scene and only discovered eight hours later as they began to move the bodies of her parents and grandmother. Both girls survived the attack and have since been given new identities.

The murders of the al-Hilli family were violent and brutal. Each victim had been shot multiple times, all with at least one gunshot wound to the head. A cyclist, 45-year-old Sylvain Mollier, not connected to the family, was also found dead near the car, shot in the head by the same killers. In a case which has become known as the ‘Alps Murders’, the al-Hilli family murders have sparked much speculation as to who may have been responsible and why they were killed, speculation that has only intensified the more time has passed and the case remains unsolved. Questions about whether the family was targeted for murder and the cyclist caught up in the scene or if it was a random attack have been at the centre of the investigation.

This tragic case joins a long line of unsolved cases of entire families who have been murdered. This includes the Rhoden family in April 2016 where seven family members were found murdered across three different homes in Pike County, Ohio, and the Robison family murders wherein an idyllic log cabin next to Lake Michigan in 1968, six members of the same family including four children were killed by an unknown assailant.

Much of the focus in trying to uncover any motive for the killing the al-Halli family has been on the father and husband, Saad al-Hilli. His brother, Zaid al-Hilli, is reported to be growing increasingly frustrated with the lack of progress in his brother’s case. He was arrested himself in 2013 during the early investigation with suggestions of a family feud over their deceased father’s inheritance being a motive for murder. No charges were brought against him and in January 2014 the British police confirmed there was not enough evidence to link him to the murders and no further action will be taken against him.

The investigation is being led by French investigators with British police support. Police first believed it was a targeted murder attack on the family, possibly a professional ‘hit’ ordered by someone else. Saad al-Hilli’s past work as a satellite engineer on a number of defence projects, many of which were secret, was examined with no leads found. Some arrests in the case have been made but all were released without charge with no evidence to link them to the murders. By 2017 police were no closer to discovering who had murdered his family and why.

update on the Alps Murder

In the last few months, a new lead has emerged in the case. An ex-Army dog handler who is a suspect in two murders near to the location where the family was killed is now being questioned in France as a suspect in these murders. 34-year-old Nordahl Lelandais was arrested in September 2017 as a suspect in the disappearance of 9-year-old Maëlys de Araujo in the south-east of France. She disappeared after a family wedding Lelandais attended as a guest and although her body has never been found, police charged him with her kidnapping and suspected murder. This month Lelandais asked to speak to court judges and confessed to her murder, telling them he had ‘involuntarily’ killed her and informed them of where he had left her remains.

Nordahl Lelandais currently denies all other accusations against him with regards to unsolved cases outside of the murder of 9-year-old Maelys de Araujo. Whether connections will be found placing him at the scene of the al-Hilli’s murders remains to be seen. It can only be hoped that one day in the near future, the answers to who took the lives of this family can be found and justice can be achieved for them and their surviving children.