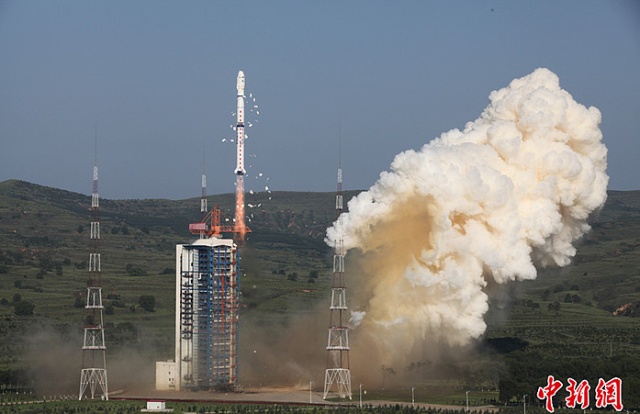 he speculation is focused on the satellites Shiyan-7, Chuangxin-3 and Shijian-15, all of which were launched on the same Long March 4C (CZ-4C) rocket on July 20 (pictured top).

The official word was that the trio carried science payloads. Nothing too strange with that. But then Shiyan-7 (also known as SY-7, or Experiment 7) recently carried out a series of maneuvers with Chuangxin-3 (CX-3) only for it to make a sudden course change to rendezvous with an older satellite, Shijian 7 (SJ-7, Practice 7), which was launched in 2005.

At launch, one of the newest satellites was thought to be equipped with a robotic arm manipulator (although, at the time, space analysts did not know which one) and at the time the Chinese language press specifically mentioned “space debris observation,” “mechanical arm operations” and the testing of “space maintenance technologies,” according to Gregory Kulacki, a senior analyst and China project manager within the U.S.-based Union of Concerned Scientists’ Global Security Program.

At face value, this could indicate that China is working on peaceful space debris mitigation technologies. Perhaps the odd maneuvers of Shiyan-7 reveal the development of techniques of orbital debris retrieval? Worryingly, there’s also a flip side to this coin.

“Since space systems are largely dual use, it should not be surprising that there would be interest in the ability to maneuver satellites in close proximity … but neither should there be blithe assumptions that this is necessarily for solely peaceful ends,” Dean Cheng, a research fellow on Chinese political and security affairs at the Heritage Foundation in Washington, D.C., told SPACE.com.

In 2007, China made its military capabilities in space abundantly clear. The nation launched an anti-satellite missile that intercepted one of its own satellites. This orbital target practice not only proved that satellites in low-Earth orbit are not safe from surface attack, the action generated around 3,000 pieces of extra space junk in a heavily used altitude — an act that drew heavy international condemnation. The debris from the intercept persist to this day.