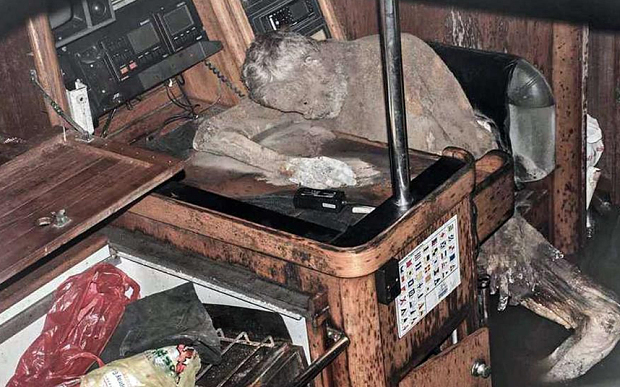 Mystery of the man missing since 2009

The “mummified” body of a round-the-world German sailor has been found slumped on his “ghost yacht” next to the radio telephone after he apparently tried to make a desperate emergency call.

The strangely preserved remains of Manfred Bajorat, 59, were found by two fishermen who spotted his vessel drifting off the coast of the southern Philippines.

The man had been sailing around the world for the last 20 years – and his last official reported sighting was in 2009.

His 40ft yacht, the Sayo, was spotted floating nearly 40 miles from the coast of the Philippines off Surigao del Sur in the Pacific Ocean two local fishermen.

The vessel was in a battered condition when it was found – the main sail was broken and much of the cabin was underwater. Tins of food, clothes and photo albums were scattered around the cabin.

It is believed that his body may have effectively been “mummified” by the ocean winds, hot temperatures and the salty sea air.

Mr Bajorat was identified by paperwork recovered from the boat. The cause of death was not immediately clear, with no signs of foul play, said Inspector Mark Navales.

“It is still a mystery to us,” said Insp Navales, deputy police chief of Barabo town on Mindanao island where the body was taken.

The man was found seated at a desk in the radio room, slumped over on his right arm “like he was sleeping”, he added.