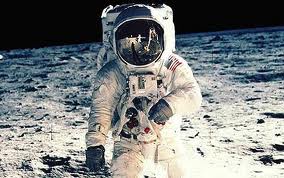 The most important video in the history of man is missing.

On July 21, 1969, the live broadcast of Neil Armstrong and Buzz Aldrin walking on the moon was broadcast around the world. Six hundred million people, or one fifth of mankind at the time, watched the event.

The video was extremely blurry because of the technological limitations of the time. In 1969, only limited bandwidth was available to transmit the video signal, which needed to be multiplexed back to the Earth, so the video of the Apollo 11 moonwalk was transmitted in a SSTV format of 10 frames per second at 320 lines of resolution.

Originally, the SSTV format was incompatible with existing NTSC, PAL, and SECAM television standards, so the tapes were converted to a different format. During the conversion, the live signal was sent to a high-quality video monitor and the screen was simply re-recorded with a conventional television camera and broadcast to the world. The optical limitations of the monitor and the camera significantly lowered contrast, brightness, and resolution of the original SSTV video. It also put a huge amount of noise in the broadcast.

You would think that NASA would have recognized the huge significance of the original analog tapes in SSTV format and kept them in a temperature controlled and safe environment, but this is not the case. In 2006, the story broke that NASA had lost 700 boxes of magnetic data tapes, including the original SSTV recordings of the moonwalk. The mistake was huge because modern technology could easily allow for the SSTV tapes to be transformed into a higher quality video of the Apollo 11 moon landing.

Of course, many suspect the truth is that NASA did not want anyone getting hold of the tapes, as the footage was likely faked.