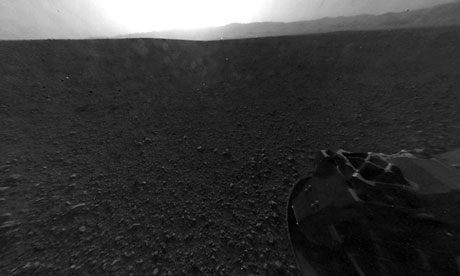 The rover  has transmitted its first colour photo and a low-resolution video showing the last 2 1/2 minutes of its dramatic dive through the Martian atmosphere, giving an insight into a spacecraft landing on another world.

As thumbnails of the video flashed on a big screen on Monday, scientists and engineers at the Nasa Jet Propulsion Laboratory let out “oohs” and “aahs.”

The recording began with the protective heat shield falling away and ended with dust being kicked up as the rover was lowered by cables inside an ancient crater. It will be some time before full-resolution frames are beamed back.

The full video “will just be exquisite,” said Michael Malin, the chief scientist of the instrument.

The first colour photo from the crater where Curiosity landed showed a pebbly landscape and the rim of Gale Crater off in the distance. Curiosity snapped the photo on its first day on the surface after touching down Sunday night.

The rover took the shot with a camera at the end of its robotic arm. The landscape looked fuzzy because the camera’s removable cover was coated with dust that kicked up during the descent.