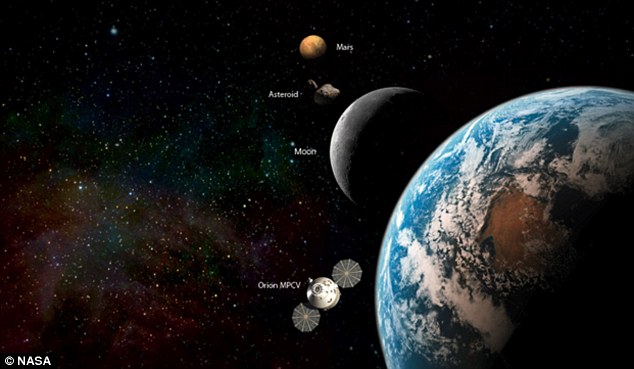 Nasa wants to build a manned base which can be ‘parked’ beyond the dark side of the moon as a ‘gateway spacecraft’, to serve as a starting point for manned expeditions to Mars.

It would remain permanently in space 277,000 miles from Earth – in context, the International Space Station is just 230 miles away.

The spaceship would expand man’s horizons – but it will require much problem-solving to figure out how to protect astronauts from radiation, and how to re-supply the ship from a quarter of a million miles away.

The launch project is currently being built at an estimated cost of $3billion a year, and should be ready in 2017.

Nasa then plans to begin building the moon outpost two years after that.

The Orlando Sentinal reports that Nasa spoke to the White House about the idea last month, but whether the U.S. Congress will support the multi-billion-dollar project is not yet known.

The U.S. space agency is forming a team to draw up plans for the outpost, to be parked at a spot in space known as the Earth-moon libration point 2 (EML-2).