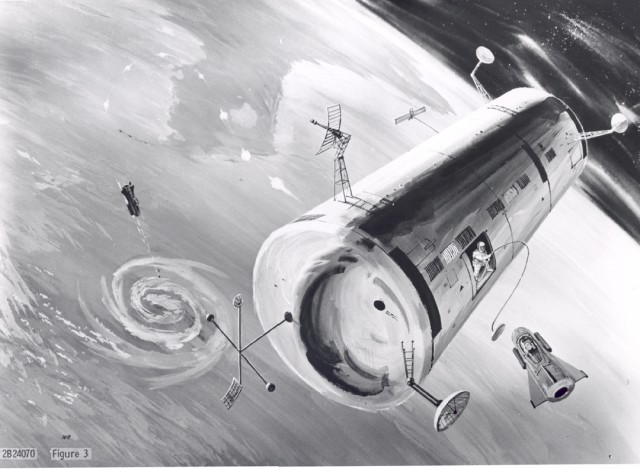 A 1960 concept image of the United States Air Force’s proposed Manned Orbiting Laboratory (MOL) that was intended to test the military usefulness of having humans in orbit.

The station’s baseline configuration was that of a two-person Gemini B spacecraft that could be attached to a laboratory vehicle. The structure was planned to launch onboard a Titan IIIC rocket. The station would be used for a month and then the astronauts could return to the Gemini capsule for transport back to Earth. The first launch of the MOL was scheduled for December 15, 1969, but was then pushed back to the fall of 1971.

The program was cancelled by Defense Secretary Melvin R. Laird in 1969 after the estimated cost of the program had risen in excess of $3 billion, and had already spent $1.3 billion. Some of the military astronauts selected for the program then transferred to NASA and became some of the first people to fly the Space Shuttle, including Richard Truly, who later became the NASA Administrator.