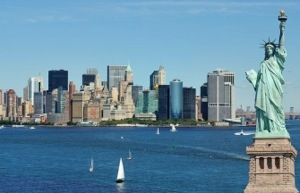 Wow, space artist Nickolay Lamm has teamed up with astrobiologist M. Browning Vogel to create a fanciful set of illustration of the New York City skyline against skies of the solar system’s planets. We won’t worry about the planet habitability that would have been a prerequisite for erecting the skyscrapers; rather we’ll take a Twilight Zone-ish parallel universe look at alternative spacescapes that would make us nostalgic for the blue skies of Earth. 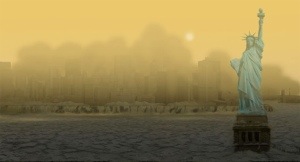 Due to continuous volcanic activity, Venus’ thick carbon dioxide atmosphere contains clouds of sulfuric acid. The sun never shines under perpetually cloudy skies that obscure much of the NYC skyline. Venus lost its oceans billions of years ago, leaving behind a bone-dry basaltic terrain of flowing lava and large impact craters. The Statue of Liberty sits on a sea of lava. 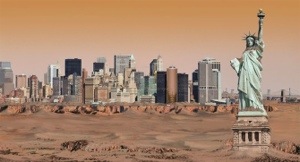 The NYC skyline is covered in orange talcum power-sized dust, under a perpetually orange atmosphere. Mars’ atmosphere has an oxidizing chemistry that converts the iron on its surface into various forms of rust. Strong convective currents in the atmosphere also stir up frequent dust storms that howl across the skyscrapers. 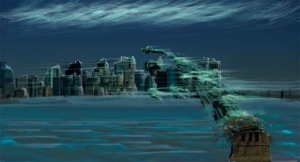 Neptune contains a considerable fraction of methane, giving the air a cyan tint. Occasional clouds of methane and bands of hydrocarbon haze appear above the skyline. Water ice forms high altitude cirrostratus clouds in bone-chilling temperatures of -300 degrees Fahrenheit. At Neptune’s distance the sun is a feeble 1/900th its brightness as seen from Earth. The city would have to stay lit all the time. The wind speed on Neptune is 1,200 miles per hour, and this would tear apart the Statue of Liberty, sadly.