Home Alien Life Obama to save us from Alien Attack!!
UNEXPLAINED MYSTERIES 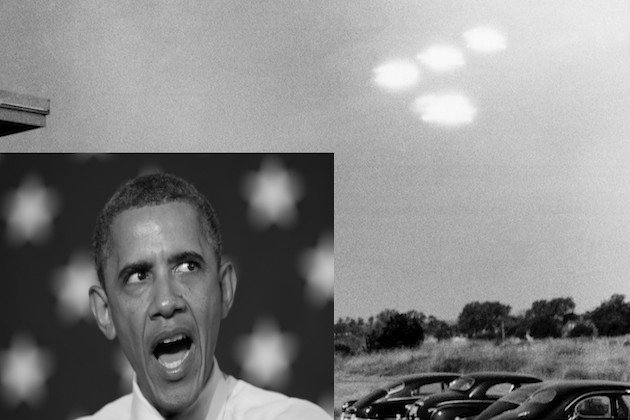 If the Earth ever is attacked by hostile beings from another planet, a strong majority of voters believe Mr. Obama would be superior in dealing with the situation.

In what may be our favorite polling question of the campaign so far, a survey by the National Geographic Channel, first reported by USA Today, finds that 65 percent of Americans say Obama would be better suited than Mr. Romney to handle an alien invasion.

And lest you are tempted to dismiss this poll as pure silliness, the study also found that 36 percent of Americans think UFOs exist, while another 48 percent aren’t sure. Which means that at least some of the respondents judging the presidential candidates’ alien-fighting abilities may see it as a plausible scenario. (According to the poll, 79 percent also say the federal government has been hiding information about UFOs from the public – which may actually say more about the public’s overall distrust of government than its views on aliens.)

Even for those who don’t really think aliens might attack Earth, we say it’s an interesting poll question – essentially prodding which candidate voters would prefer at the helm in the case of a sudden, terrifying crisis that threatens the world’s very existence.

Or, to put it another way, it’s kind of like asking voters which candidate has more Will Smith in him? Who’d be more likely to bring down an enemy spacecraft, charge over to the wreckage, and punch the alien in the face?

For most Americans, the answer seems to be Obama.

Of course, part of Obama’s edge here may come from incumbency. He’s already the president, so voters are automatically more inclined to see him as a wartime leader. Obama’s foreign policy ratings in general have been a source of strength for him. This is the guy who took down Osama bin Laden, after all –so why not aliens?

“OK, I can neither confirm or deny the existence of extraterrestrials,” Obama reportedly said from the White House Situation Room. “But I can tell you if there had been a top secret meeting, and if there would have been a discussion about it, it would have taken place in this room.”