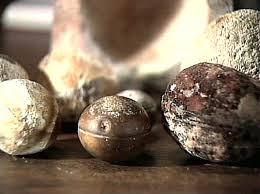 For more than three decades, miners at the Wonderstone Silver Mine near Ottosdal in the Western Transvaal, South Africa, have been extracting out of deep rock several strange metallic spheroids. So far at least 200 have been found.

In 1979, several were closely examined by J.R. McIver, professor of geology at the University of Witwaterstand in Johannesburg, and geologist professor Andries Bisschoff of Potsshefstroom University.

The metallic spheroids look like flattened globes, averaging 1 to 4 inches in diameter, and their exteriors usually are colored steel-blue with a reddish reflection, and embedded in the metal are tiny flecks of white fibers. They are made of a nickel-steel alloy which does not occur naturally, and is of a composition that rules out meteoric origin. Some have only a thin shell a quarter of an inch thick, and when broken open are found filled with a strange spongy material that disintegrates into dust on contact with the air.

What makes all this very remarkable is that the spheroids were mined out of a layer of pyrophyllite rock, dated both geologically and by various radio-isotope dating techniques to at least 2.8 billion years old.

Adding mystery to mystery, Roelf Marx, curator of the South African Klerksdorp Museum, has discovered that the spheroid he has on exhibit slowly rotates on its axis by its own power, while locked in its display case and free of outside vibrations.

Stones, which are found in rock scientists say are billions of years old- and which rotate on their axes, captured the attention of Mr. John Hund of Pietersburg fifteen years ago….

While playing with the stone on a very flat surface at a restaurant one day, Hund realized it was very well balanced. He took it to the California Space Institute at the University of California to have tests done to determine just how well balanced it was. “It turned out that the balance is so fine, it exceeded the limit of their measuring technology and these are the guys who make gyrocompasses for NASA.

The stone is balanced to within one-hundred thousandths of an inch from absolute perfection,” explains Hund. Nobody knows what these stones are.

One NASA scientist reportedly told Hund that they do not have the technology to create anything as finely balanced as this. He said the only way that either nature or human technology could create something so finely balanced would be in zero gravity.