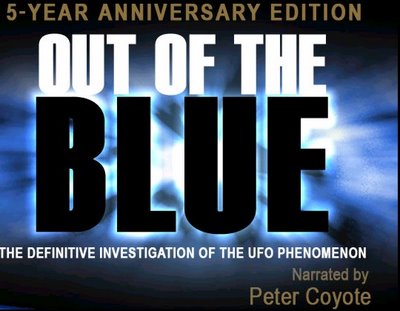 From UFOTV®, accept no imitations. Narrated by Peter Coyote, OUT OF THE BLUE is widely considered one of the best documentary films ever made about UFOs and was directed by celebrated filmmaker James Fox. The films producers traveled around the world to investigate some of the most famous UFO events on record. Through exclusive interviews with high-ranking military and government personnel, this award-winning film supports the theory that some UFOs are of extraterrestrial origin.


“The weirdest thing about the documentary OUT OF THE BLUE is how weird it isn’t.” – TV Guide
“…methodically lays out out an argument that something is out there.” – Associated Press
“OUT OF THE BLUE emerges as one of the very best films ever produces on this, one of the most interesting in the history of science.” – Skeptic Magazine

COMING TO DVD from UFOTV – Out of the Blue: The Definitive Investigation on the UFO Phenomenon – LOADED with Bonus Features and Interviews – Cat# U81112, Go to http://www.UFOTV.com