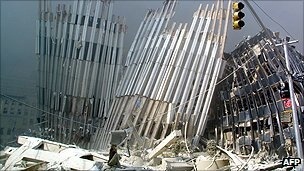 Painful Deceptions 911 Documentary by Eric Hufschmid – Summary of the Video’s Accusation: There is no evidence of Flight 77 or the dead passengers at the Pentagon. The Pentagon security video suggests a Global Hawk was shattered by a missile. The missile may have been launched from a defensive missile system around the Pentagon.

Explosives were placed in both towers before the attack to cause the towers to disintegrate into dust. Explosives were detonated via radio by a computer in Building 7.

Building 7: It was a 47 story, steel-framed building that disintegrated later in the day, also from explosives. The 23rd floor was the Mayor’s “Emergency Command Center,” which had its own air supply. This appears to be the command center for destroying the towers.

The video also includes: an explanation of turbofans, explosives, the Oklahoma City bombing, the media that Americans mistakenly refer to as our “Free Press,” and why deception is the main weapon in this war to control us.