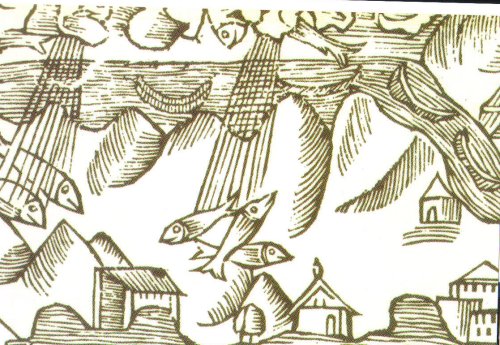 One of the most recent examples of fish falling from the sky took place the summer of 2000 in Ethiopia. A local newspaper reported: “The unusual rain of fish, which dropped in millions from the air – some dead and others still struggling – created panic among the mostly religious farmers.” This is just one of countless case studies of rains of fish, frogs, periwinkles – even alligators – that have been cataloged over the centuries, many by famed paranormal researcher Charles Fort. (Such rains of creatures have been, in fact, come to be known as “Fortean” activity.)

Most often these rains of animals are attributed to severe storms, tornadoes, water spouts and related phenomena. Although the theory has not yet been proved, it holds that strong winds pick up the fish or frogs from bodies of water such as ponds, streams and lakes, carry them aloft – sometimes for miles and miles – and then drop them over land.

The peculiar fact that challenges this theory is this: in most cases, the rains are of one kind of animal only. It rains one species of herring, for example, or a particular kind of frog. How can this be explained? Could a powerful gust of wind be so discriminating? If the storm scooped up water from a pond, wouldn’t it rain all kinds of things one finds in a pond – frogs, toads, fish, weeds, sticks and probably beer cans?