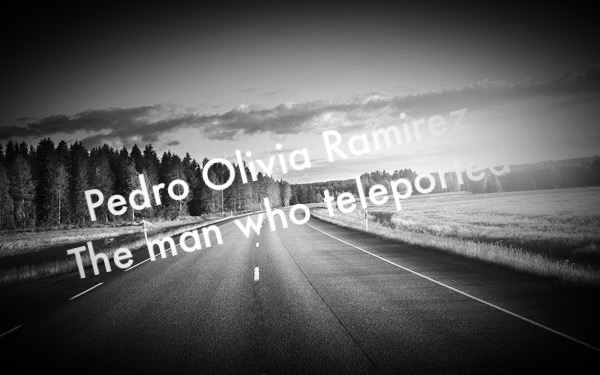 During the last few hundred years a lot of people have talked about how they are thrown into a different reality. Sometimes they wake up in a different world, which at first glance seem the same, until they begin to notice subtle changes.

In other cases, people move to another reality, after being “dragged somewhere else” and only notice after a series of disturbing, sometimes scary, incidents.

This is the strange case of Pedro Olivia Ramirez of Alcala de Guadeyra – a city, a few miles southeast of Seville, Spain.

The story was documented by the researcher Joaquin Mateos Nogales. Like all other teleportation multiverse amazing experiences the story of  Ramirez is beyond the comprehension of modern science …

The following is a translation from his story

According to records provided by the journalist Angelo Carret Olmedo, Spaniard Pedro Oliva Ramirez is a successful engineer, educated person who is not  “foreign” to the strange events in his life.

At age 17, Ramirez had a number of  strange experiences around UFO sightings.

One night Ramirez drove home to the city of Alcalá de Guadeyra via  a narrow country road after a trip to Seville, where he had been on a business trip.

Suddenly, sometime after 11 pm, Ramirez pulled off the  road in shock! the narrow road had suddenly turned into a 6 lane highway in front of him –  three lanes in each direction. Well aware of the way, Ramirez was sure that he did not do make a wrong turn somewhere.

Stranger in a Strange Land

He also noticed the area has changed – Huge industrial buildings now appeared in the distance,  Ramirez also saw small houses and apartment buildings. He estimated their height was about twenty floors. He also noticed a thin, high green grass along both sides of the highway.

When the engineer went on his way, he began to feel an inexplicable sense of temperature rise. It seemed to him that he heard distant voices. Among the many voices, he remembers what he heard or felt one voice, who told him that he had been “teleported to another land”.

Afraid  Ramirez continued driving. When he was traveling, a lot of cars whizzed by, moving in the other direction. He later described that all the car’s appear as outdated, older Cadillacs. Each of them was white or beige. They had something like a license plate, it was a dark, narrow rectangles. Nothing like the plates issued in Spain.

After a while Ramirez came to a left turn,  He turned.

The road and the landscape has changed dramatically again. After 30 minutes of traffic on the new road, he came across a sign pointing the way to the Spanish city Alkabala, Malaga and Seville.

Choosing the road leading back to Seville, he drove for a while, and then suddenly stopped the car in amazement. Immediately to the left of him was his home in the town of Alcala de Guadeyra.

He later discovered that he had not been able to find the intersection, which is mysteriously brought him home, because a terrible night. He never found a way six-lane again. It did not appear on any map, and whoever Ramirez did not ask anybody about this highway ever had.

As a rule, the journey between Seville and Alcala de Guadeyra takes about 30 minutes. Ramirez drove more than three hours.

Lerin Garcia came from other Earth

Amazing story Lerin Garcia, who once came here from another universe, intrigued by tens of thousands of readers.

The terrible experience of the three girls, who were traveling home late at night and found themselves in a strange land, and among strange people, has never been fully explained.