Peter Kurten, the eldest of thirteen children, was born in Koln-Mulheim, a suburb of Cologne, Germany. His poverty-stricken childhood consisted of living in a one room apartment with a sadistic, alcoholic father. He and his siblings were subjected to constant physical abuse and were forced to watch the brutal rapes of their mother by their father.

At age nine he formed an unhealthy relationship with a dog-catcher living in the same apartment building, who introduced him to the practice of bestiality. He was soon performing perverse acts with sheep and goats from nearby stables while stabbing them to death. Kurten also professed to have drowned two of his schoolmates when they were playing on a raft in the Rhine. He pushed one of the schoolmates overboard and when the second boy jumped in to save him, Kurten held both of them underwater. At the time their deaths were ruled a tragic accident.

By the age of 16, Kurten had begun to commit petty crimes and had run away from home to escape the violence. Shortly thereafter his father was jailed for three years for committing incest with Kurten’s 13-year-old sister.

During one of his many stints in prison, Kurten was placed in solitary confinement where he developed a perverse fantasy which allowed him to achieve an orgasm while he imagined performing brutal sex acts. He enjoyed these fantasies so much that he would commit minor infractions in order to ensure another stint in solitary.

Peter Kurten’s first murder victim was 10-year-old Christine Klein on May 25, 1913. She was upstairs asleep in her bedroom as her parents worked in the tavern below the apartment. Kurten broke in planning to rob the apartment. As he opened doors looking for valuables to steal he happened across young Christine. He seized her by the neck, choked her unconscious and then penetrated her genitals with his fingers. When he finished molesting her he slit her throat with a small pocket knife he carried.

Suspicion immediately fell on Christine’s uncle, Otto Klein. He had asked Christine’s father for a loan and when he was refused Otto made threats towards his brother. He was arrested and tried for the murder of his niece but was acquitted due to lack of evidence.

Kurten was called up for military service but was sent to prison for desertion. He was released in 1921 and married a former prostitute. He found work in a factory and for four years led a life of relative normalcy. He was inexorably drawn back to Dusseldorf and into a life of petty crime that quickly escalated to sexual attacks.

In 1929 he brutally attacked Maria Kuhn and stabbed her 24 times. Miraculously she survived the attack.

On February 9, 1929, Kurten brutally murdered 9-year-old Rosa Ohliger and dumped her under a bush. While he stabbed her 13 times he became sexually excited and climaxed. He returned to the scene of the crime several times to relive the excitement he felt during the attack and during one of these visits he poured gasoline over her body and set her body on fire in an attempt to destroy evidence.

Five days later Kurten stabbed to death a 45-year-old mechanic named Scheer 20 times on a road in Flingern. Kurten returned to the scene of the crime the next day and struck up a conversation with one of the detectives investigating the murder.

The German press was following the murders and investigation closely and when they learned that the police thought the murderer might be drinking his victims blood, they dubbed him the “Vampire of Dusseldorf.”

A few days after the latest attack, a mentally-disabled man named Stausberg was arrested for similar crimes. While in custody he confessed to the Vampire’s killings and was admitted to an insane asylum. The police, convinced that they had the right man, closed the case leaving Kurten free to select more victims.

On August 23, 1929, two foster sisters,5-year-old Gertrude Hamacher and 14-year-old Louise Lenzen, left the fairgrounds of the town of Flehe to walked home. They were approached on footpath by Kurten who gave Louise some money and asked her to go and buy him some cigarettes. He promised to look after Gertrude. When Louise left he gathered Gertrude up in his arms, strangled her and then slit her throat. When Louise returned with his cigarettes he strangled her also and then decapitated her.

Kurten’s brutal attacks increased in veracity and frequency. Not all of his victims died but his nondescript appearance worked in his favor.

September 1929, He raped and then beat to death a young girl named Ida Reuter. As was a servant girl named Elizabeth Dorrier on October 12, 1929.

On November 7, 1929 5-year-old Gertrude Albermann was strangled and stabbed 35 times. Two days later he sent a map to a local newspaper detailing her exact position. The police found her body right where he had indicated on the map.

On May 14, 1930 Kurten met an unemployed domestic worker named Maria Budlick at the Dusseldorf tram station. He offered her a place to stay and took her back to his apartment. When she refused to have sex with him he offered to walk her back to the tram station. Along the way he raped her and then left her at the tram station entrance alive. She was convinced to cooperate with the police and led them back to Kurten’s apartment. He escaped detection but realized that his days of killing were numbered. 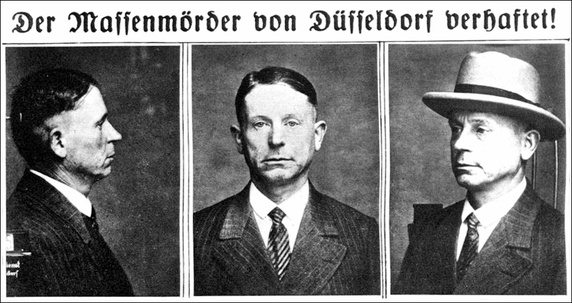 Confession of a vampire

Kurten confessed to his wife that he was Vampire of Dusseldorf and insisted that she go to the police and turn him in so she could collect the substantial reward. He had remained fond of his wife and wanted her to be financially secure after he was gone.

On May 30, 1930 Mrs Kurten reluctantly went to the police and led them to a local church where Kurten peacefully surrendered.

During his confession, Peter Kurten admitted to 79 acts of crime and derived great pleasure as he described each one in great detail.

Peter Kurten was charged with 9 murders and 7 attempted murders and went on trial April 13, 1931. Throughout the trial Kurten showed no remorse for his victims.

On July 2, 1931, Peter Kurten was executed by guillotine in the prison courtyard at Klingelputz Prison in Cologne, Germany.

His last words were to the prison psychiatrist on his way to the guillotine:

“Tell me, after my head has been chopped off, will I still be able to hear, a least for a moment, the sound of my own blood gushing from the stump of my neck? …that would be the pleasure to end all pleasures.”