Phobos program was an unmanned space mission consisting of two probes launched by the Soviet Union to study Mars and its moons Phobos and Deimos.

Only one of the probes made it to Mars, and just days before it was due to land, it sent a few mysterious photos to mission control before going offline forever due  to a critical failure.

The Mars orbiter had returned 38 images with a resolution of up to 40 meters – before the strange event caused a failure and it was lost forever.

Phobos 1 operated nominally until an expected communications session on September 2, 1988 failed to occur. The failure of controllers to regain contact with the spacecraft was traced to an error in the software uploaded on August 29/August 30, which had deactivated the attitude thrusters. By losing its lock on the Sun, the spacecraft could no longer properly orient its solar arrays, thus depleting its batteries.

Software instructions to turn off the probe’s attitude control, normally a fatal operation, were part of a routine used when testing the spacecraft on the ground. Normally this routine would be removed before launch. However, the software was coded in PROMs, and so removing the test code would have required removing and replacing the entire computer.

Because of time pressure from the impending launch, engineers decided to leave the command sequence in, though it should never be used. However, a single-character error in constructing an upload sequence resulted in the command executing, with subsequent loss of the spacecraft.

Phobos 2 was launched on July 12, 1988, and entered orbit on January 29, 1989. Phobos 2 operated nominally throughout its cruise and Mars orbital insertion phases on January 29, 1989, gathering data on the Sun, the interplanetary medium, Mars, and Phobos. Phobos 2 investigated Mars’s surface and atmosphere and returned 37 images of Phobos with a resolution of up to 40 meters.

Included within the images was an unexplained image of what appears to be a UFO on the surface of Mars.

Soviet scientists desperately tried to re-establish communication with their injured craft for many hours but were unsuccessful. Then suddenly all efforts to regain command faded as the final image slowly appearred on giant screens deep inside space command. All attention was now focused on the anomaly

Despite demands by those leading the mission to cover-up the failure and subsequent discovery, news about the anomaly was leaked. An image has since been released, however, few Soviet agents have come foward with official evidence or conclusive mission data

Since that historic event, space agencies around the world have quietely funded extraordinary experiments, sent alongside succesful missions, such as the Mars Global Surveyor, Mars Express, and Mars Reconnaissance Orbiter. With the hope of uncovering the mystery of the Phobos anomaly, these secret experiments may provide the data needed to either explain the 1988 event or confirm the existence of an exotic force protecting the moonlet. 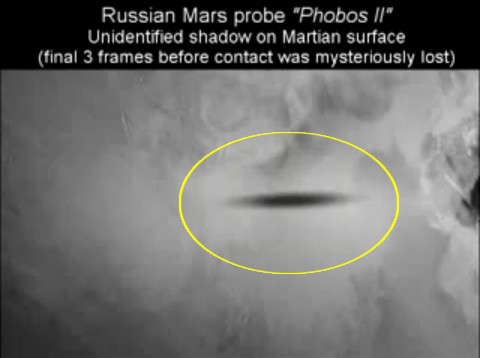 The Phobos monolith is a large rock on the surface of Mars’s moon Phobos. It is a boulder about 85 m (279 ft) across.

A monolith is a geological feature consisting of a single massive piece of rock. Monoliths also occur naturally on Earth, but it has been suggested that the Phobos monolith may be a piece of impact ejecta or even an ALIEN structure.

The monolith is a bright object near Stickney crater, described as a “building sized” boulder, which casts a prominent shadow.

When the Mars Reconnaissance Orbiter (MRO) spacecraft was mapping the small moon of Mars, Phobos, and sent its incredible images from the small, potato-shaped moon back to Earth satellite ufologists had a field day speaking about the mysterious structure that was clearly visible on the surface of Phobos. There in plain view, a large rectangular object undoubtedly resembling an artificial monolith stands alone.

Nothing in the vicinity has a similar shape or size, so the question is, what is it? What is its purpose? And who placed it there?

Theories trying to explain the mysterious monolith on the Martian satellite accumulated throughout the years. Renowned scientist Dr. Isaac Asimov wrote a story where he suggested that Phobos was an abandoned alien Ship from the distant past, that was captured by the gravity of the Red Planet.

The origins of Mars moons continues to be highly controversial. Scientists do not agree with the significance or even relevance of certain aspects constituting the different theories. This discord has arisen primarily because neither moon resembles any other satellite in our solar system. There existence has puzzled scientists to the point of exhaustion