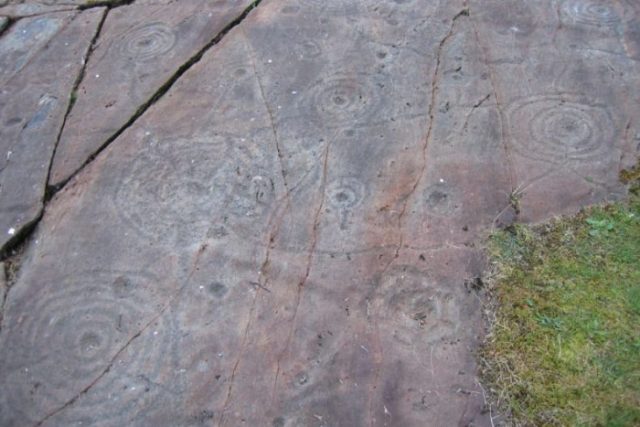 Known as the Achnabreck Cup and Ring Rocks, the mysterious motifs consist of a series of spiral ring marks – deep depressions in the rock surrounded by Saturn-like concentric rings and horseshoe shapes. Spread out across several rocky outcrops, the Achnabreck rings are among the largest ever discovered in Europe – some measuring a metre in diameter.

It is thought that the intricate designs were carved out over 5,000 years ago – predating the famous Neolithic settlement at Skara Brae by two thousand years.

The site was first reported by Sir James Simpson back in 1864, before being comprehensively surveyed and mapped out a century later by Ronald W. B. Morris.

Nobody knows why the site came into being, though some historians have argued that the carvings may have carried a symbolic or spiritualistic purpose. Many later examples have been discovered close to major burial sites, suggesting that the markings typically possessed a sacred significance. Gutters run through some of the rings, which some believe could have been used to channel water in some form of ritual.