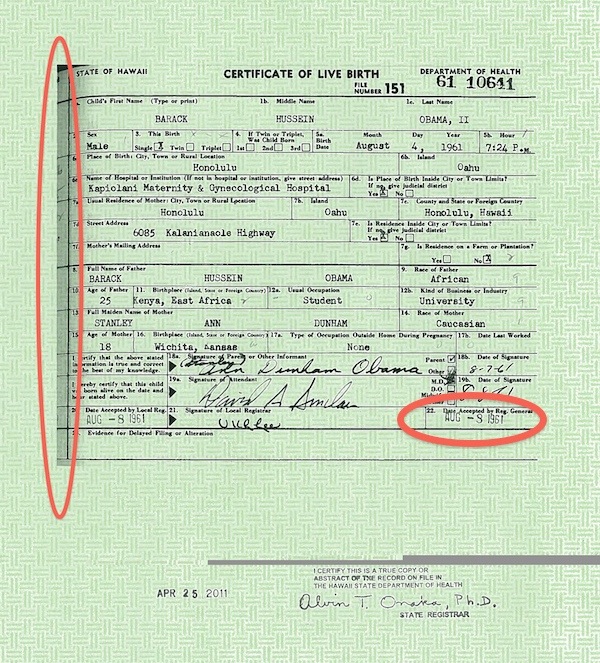 During Barack Obama’s campaign for president and in the years following his election, many conspiracy theories have been circulated, asserting that he is not a natural-born citizen of the United States and consequently, under Article Two of the U.S. Constitution, is ineligible to be President of the United States.

The patterned background is too seamless for a document kept in a bound volume.

The “Date Accepted” is four days later than “Date of Birth.

Smudges in box next to name of attendant.

M.D. who signed the document conveniently died eight years ago.

Unexplained “8991” on document’s right side.

Birth certificate of someone born at the same hospital a day later has a lower number.

There is no official seal.

Instead of “African” under father’s race, “Colored” or “Negro” would have been used in 1961.

The type for “Caucasian” is too perfect, not possible for a typewriter from 1961.

Signature of mother and attendant are too similar.

Address for Obama’s childhood home is the middle of a highway.

Hawaii’s Governor until recently claimed there was no birth certificate.

Photoshopped layers can be found.

We all know his real name is Barry Saetoro 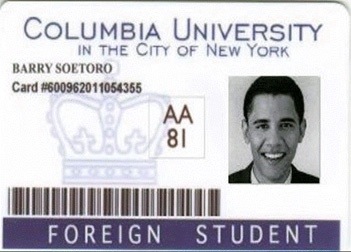