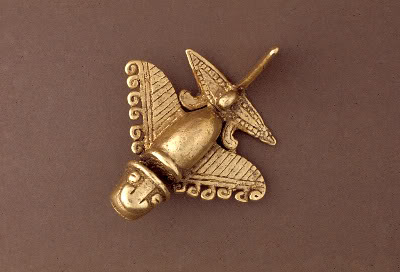 According to mainstream archeology, the pre-columbian Quimbaya culture were believed to have lived in South America from 300 to 1550 CE and are best known for their precise gold and metalwork. The majority of gold pieces discovered are made with a tumbaga alloy with 30% copper, very similar to those accounts mentioned by Plato in his dialogues about the lost city of Atlantis. Among the intricate gold works are several types of insects and two devices that stand out to be aerodynamic in nature and of no other insect known to exist.

The pieces look very much like the designs of modern airplanes and incorporate a number of features essentially proving the Quimbaya knew and understood the principals of flight. Scale replicas of the golden flyer were built 5 times larger and tested precisely. Results from the tests showed proved these airplane shaped devices were capable of flight and actually flew without any modifications using modern techniques.

Many of these types of gold reliefs have been discovered. It is easy to notice that they look very much like Jet airplanes. There are many variations to this theme. Some archeologists argue that they are simply birds and the Quimbaya took some artistic liberties. However, others argue that there are too many coincidences that bother them. The fact that the wings are on the underside of the fuselage unlike an organic animal and much more like a modern jet. Also the orientation of the stabilizer tail. It is vertical like a plane, not horizontal like an organic life form. Also, does that one spot near the front look like a cockpit for a pilot?