A rare cloud formation was seen twice in B.C. over the last two days. The first over the Lower Mainland on Sunday morning.

A fallstreak hole (also known as a “hole punch cloud”) is a large circular or elliptical gap that can appear in cirrocumulus or altocumulus clouds.

How do they form?

High to mid level clouds, such as altocumulus, are often composed of tiny water droplets that are much colder than freezing, but have yet to freeze. These “supercooled” water droplets need a “reason” to freeze, which usually comes in the form of ice crystals. Planes passing through the cloud layer can bring these ice crystals. Once the ice crystals are introduced, the water droplet quickly freeze, grow and start to fall. A hole is left behind, which will start to expand outward as neighboring droplets start to freeze. 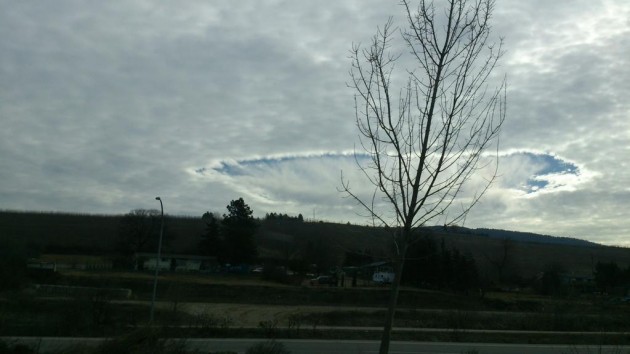