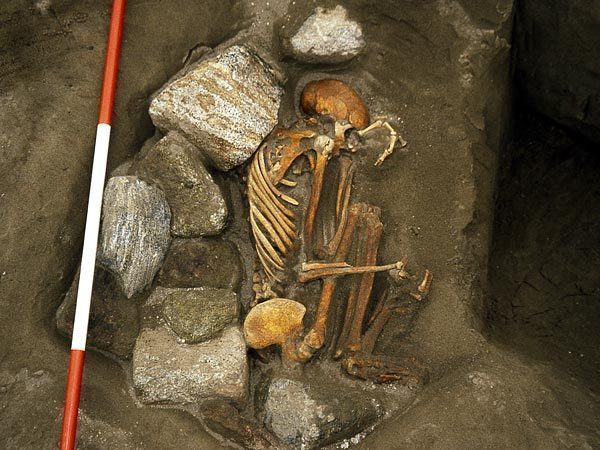 An international team of archaeologists have discovered that two mummies found on an island off the coast of Scotland are, like Dr. Frankenstein’s monster, composed of body parts from several different humans. The mummified remains, as much as 3,500 years old, suggest that the first residents of the island of South Uist in the Hebrides had some previously unsuspected burial practices.

The West Coast of South Uist was densely populated from around 2000 BC until the end of the Viking period around AD 1300. Researchers led by archaeologist Michael Parker-Pearson of the University of Sheffield have been working at a site near the modern graveyard of Cladh Hallan, which gives the site its name.  The team has so far excavated three roundhouses from a village that was apparently occupied from around 2200 BC to 800 BC. A little more than a decade ago, they found the two skeletons under one of the houses, as well as the remains of a teenage girl and a 3-year-old child.

The two primary skeletons were buried in a fetal position and showed evidence of having been preserved. Chemical evidence suggests they were mummified by being placed in nearby peat bogs for a year or longer. The high acidity and low oxygen content of the bog prevents bacteria from breaking down body tissues. After preservation, the skeletons were apparently removed from the bog and buried.

But the skeletons did not “look right” to the researchers. The female’s jaw didn’t fit into the rest of her skull, for example. Closer examination of the male, they reported in the Journal of Archaeological Science, showed that arthritis was present on the vertebrae of the neck, but not on the rest of the spine. The lower jaw had all of its teeth, while the upper jaw had none; but the condition of the lower jaw’s teeth showed that they had been paired with upper teeth. The team concluded that the skeleton has been assembled from parts of at least three bodies, some of which were separated by several hundred years of time.

DNA analysis of the female bones by archaeologist Terry Brown of the University of Manchester revealed that the lower jaw, arm bone and thigh bone all came from different people, none of them related maternally. The bones were apparently assembled between 1310 BC and 1130 BC. Although there is overlap between the estimated times of assembly of the two skeletons, Parker-Pearson believes that they were put together at different times.

Why is a question that is not so easily answered. One simple possibility might be that pieces of a skeleton were inadvertently lost and spare parts were used to assemble a complete skeleton for burial. But Parker-Pearson thinks it more likely that the skeletons had ceremonial purpose. Rights to land, for example, depended on ancestral claims, so it is possible that having ancestors around might have strengthened claims. Alternatively, the fusion of the bones to make one skeleton might had symbolized the fusion of several families in one village or roundhouse.

“Altogether, these results have completely changed our ideas about treatment of the dead in prehistoric Britain,” Parker-Pearson told LiveScience. “Other archaeologists are now identifying similar examples now that the breakthrough has been made — beforehand, it was just unthinkable.”