The Hotel del Coronado is a stunning Victorian beachfront resort hotel in the very southern California city of Coronado, just south of San Diego. It was only four years open when a beautiful young woman named Kate Morgan checked in on November 24th, 1892. She was apparently very ill for the time she spent at the hotel, and it was later speculated she had taken a large dose of quinine in an effort to induce miscarriage of an unwanted child. That she was distraught there was little argument, so when she was found on the outside steps leading to the beach on November 29th, with a single bullet hole in her temple and a gun nearby, the death was quickly ruled a suicide. From that point on, strange phenomena have been reported at the hotel: strange noises, lights flickering on and off, and even the occasional ghostly woman in Victorian garb wandering the halls.

It is worth noting during my research on this story that the particular room number where most of the phenomena is witnessed varies from account to account. Whether because the accounts are second hand (and many of them are), or whether there is confusion due to the changing of the room number over the years as the hotel has expanded, I cannot say.

It still remains one of the most famous ghost stories ever  – 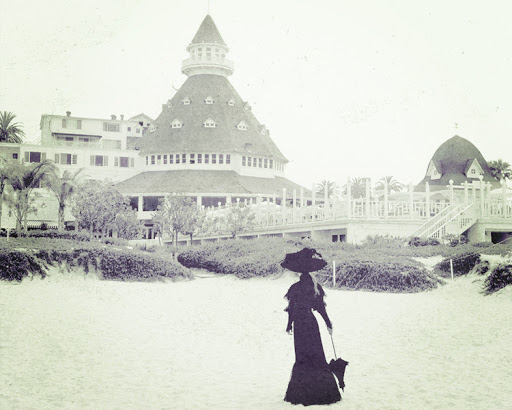 Here is the Hilton Hotels version of the  story

Kate Morgan – a young woman who checked into Hotel del Coronado in 1892 – never checked out. Instead, it’s thought her lovely likeness and gentle spirit remain as the resort’s resident ghost. Learn more about her story.

Who Was Kate Morgan?

Kate Morgan, age 24, arrived on Thanksgiving Day, alone and unhappy. According to hotel employees, she said she was waiting for a gentleman to join her. After five lonely days, Kate took her own life.

At the time of her death, police could find nothing to positively identify her, so a description of Kate was telegraphed to police agencies around the country. As a result, newspapers began to refer to Kate as the “beautiful stranger.” After Kate Morgan’s identity was confirmed – she was married but estranged from her husband – it was surmised that she had arrived at The Del hoping to rendezvous with a lover.

Kate had been employed as a domestic in a wealthy Los Angeles household. From there, she traveled by train to the hotel, where fellow passengers reported that a woman matching Kate’s description had argued with a male companion, who then deserted her en route. During her stay, Kate was described as sickly and sorrowful, venturing into San Diego to buy a handgun, and the San Diego coroner later confirmed that Kate had died from a self-inflicted gunshot wound.

The Ghost of Kate Morgan

According to the hotel’s book, Beautiful Stranger: The Ghost of Kate Morgan and the Hotel del Coronado, since that time, guests and employees have attested to ghostly goings-on. Most have to do with Kate’s original third-floor guestroom, where visitors have experienced flickering lights, a television that turns itself on and off, breezes coming from nowhere, inexplicable scents and sounds, items moving of their own accord, doors that randomly open and close, abrupt changes in room temperature, and unexplained footsteps and voices. The story of Kate Morgan continues to intrigue hotel visitors, and the room in which she stayed is the most requested guestroom at the hotel.

There have also been Kate sightings in hotel hallways and along the seashore. Another very “active” area is the resort’s gift shop, Est. 1888, where visitors and employees routinely witness haunted happenings and giftware mysteriously flying off shelves, oftentimes falling upright and always unbroken.

The book, Beautiful Stranger: The Ghost of Kate Morgan and the Hotel del Coronado is the official account of Kate Morgan’s 1892 visit and contains a chronology of Kate’s hotel activities; a transcription of the coroner’s inquest; dozens of newspaper reports about Kate’s stay; vintage photos of the hotel; as well as detailed descriptions of paranormal sightings. Its well worth a read if you like strange stories.