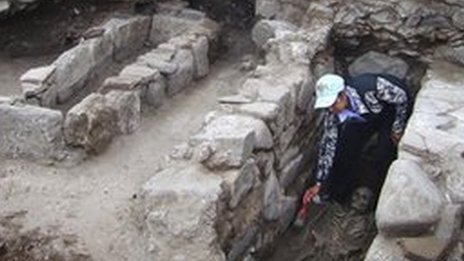 Archaeologists in Bulgaria have found two medieval skeletons pierced through the chest with iron rods to supposedly stop them from turning into vampires.

The discovery illustrates a pagan practice common in some villages up until a century ago, say historians.

People deemed bad had their hearts stabbed after death, for fear they would return to feast on humans’ blood.

Similar archaeological sites have also been unearthed in other Balkan countries.

Bulgaria is home to around 100 known “vampire skeleton” burials.

Searchers stumbled across the latest two specimens, dating back to the Middle Ages, in the Black Sea town of Sozopol.

“These skeletons stabbed with rods illustrate a practice which was common in some Bulgarian villages up until the first decade of the 20th Century,” explained Bozhidar Dimitrov who heads the National History Museum in the Bulgarian capital Sofia.

People believed the rod would pin the dead into their graves to prevent them from leaving at midnight and terrorising the living, the historian added.

Archaeologist Petar Balabanov, who in 2004 discovered six nailed-down skeletons at a site near the eastern Bulgarian town of Debelt, said the pagan rite had also been practised in neighbouring Serbia and other Balkan countries.

Vampire legends form an important part of the region’s folklore.

The myths directly inspired Bram Stoker’s legendary gothic horror novel, Dracula, which was first published in 1897 and has since been turned into numerous filmic versions