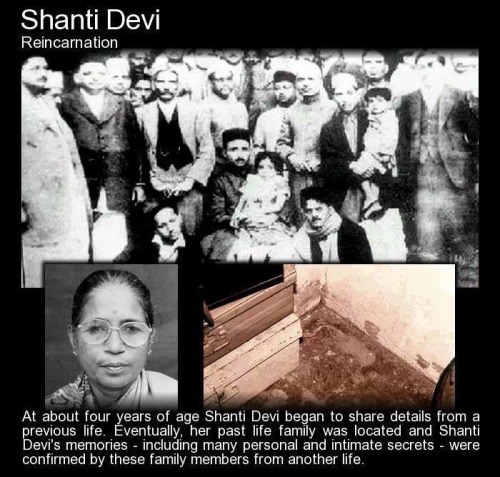 Like other strange stories of reincarnation such as the case of James Leininger The Shanti Devi remains unexplained and mysterious.

Shanti Devi was born in 1926 in Delhi, India. In 1930s, the little girl started remembering her past life. She began telling her parents at the age of four that this was not her real home. She told them that she had a husband and a son in Mathura and she wanted to go to them.

Shanti Devi told her school teachers the same. One of the teachers then wrote a letter on the address given by Shanti Devi to enquire about the same. To everyone’s surprise they got a reply from Shanti Devi’s previous husband, saying that his young wife Lugdi Devi had passed away a few years ago after giving birth to their son. The details Shanti Devi gave were all true.

The case was then brought to the attention Of Mahatma Gandhi, who set up a commission for investigation. Shanti Devi took the researchers to her previous home and gave them the exact description of how her house and neighbourhood looked before. She recognised her husband Kedarnath, her sister and son. She told him details of their married life which made Kedarnath believe that she was indeed Lugdi Devi, born again. Shanti Devi also recognised her family members. She gave correct information about her family memebers which no one outside the family would have ever known.

The commission’s report stated that Shanti Devi was the reincarnation of Lugdi Devi.