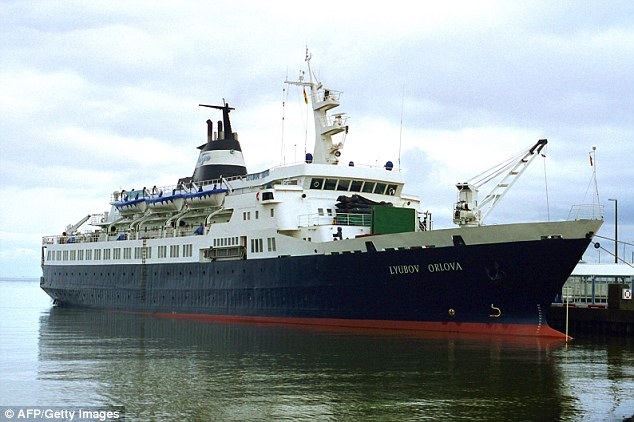 MV Lyubov Orlova (built as Lyubovy Orlova) was a 1976 Yugoslavia-built ice-strengthened Maria Yermolova-class cruise ship, which was primarily used for Antarctic cruises. After being taken out of service in 2010, she sat in St. John’s, Newfoundland, Canada for two years. Decommissioning was fraught with problems and the ship eventually became a floating derelict in the North Atlantic Ocean in 2013. She was believed to have sunk. However reports of strange sightings of the ship continue to this day

The abandoned ship was thought to be lost forever, but has now been discovered just of the coast of Ireland.

The strange ghost ship, with no crew, or lights is now slowly drifting further down the Atlantic.

The ship, MV Lyubov Orlova – that had been used by the Soviet Union for polar cruises and expeditions and was being towed from Canada to a scrapyard in the Caribbean in January when a cable snapped setting it adrift in international waters.

At the time, the Canadian authorities said it was decided not to pursue the drifting vessel as there are no people aboard the ship and there was a serious concern for the safety of Canadian sailors involved in the salvage operation, given the weather and dangerous sea conditions. 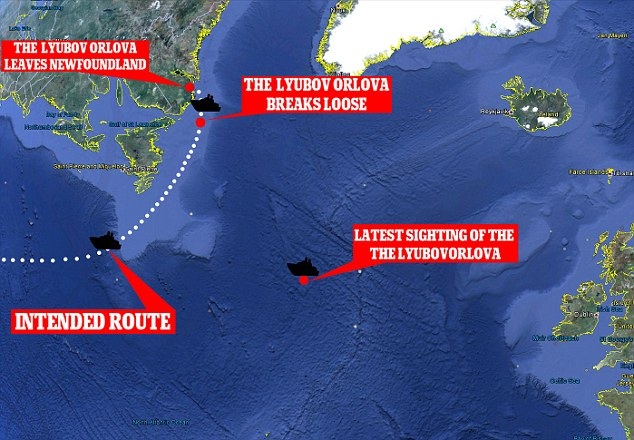 Earlier this month, maritime officials admitted they did not know the location of the ship as its global positioning system was no longer functioning. Since then there have been conflicting reports as to the ship whereabouts.

That was until a document from the National Geospatial-Intelligence Agency obtained by the AFP news agency yesterday said the Lyubov Orlova had now been spotted about 1,300 nautical miles from the Irish coast.

The ice-strengthened ship – named after the Soviet star of the same name – was built in 1976 by the Russian-based Far East Shipping Company.

A review published in October 2013 cites the receipt of two EPIRB distress signals from Lyubov Orlova in mid-ocean, one on 23 February and another on 12 March.

In January 2014, there was speculation based on an interview with a salvage company in the British tabloid The Sun that the ship might be nearing the coast of England and be infested with cannibal rats.

In November 2017, the British tabloid the Daily Star speculated that wreckage buried in sand on the beach at Coronado, California might be the missing MV Lyubov Orlova, but the wreck is actually that of the SS Monte Carlo

In June 2019 a Norwegian fishing vessel reported seeing the Lyubov Orlova 250 miles off the coast of Iceland. The report in the Norway press stated “The deck was illuminated, working lights could be seen clearly”

The last reported sighting was in 2020, from a cruise ship  in Slavbard.