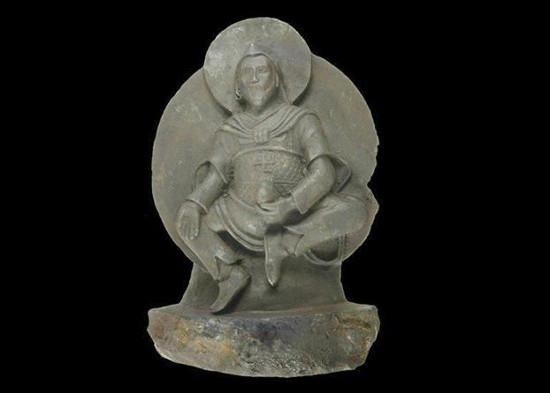 A Nazi expedition to Tibet, an ancient artifact, an outer-space connection. It sounds like a rejected script for the fourth Indiana Jones flick, but according to researchers, this really happened. A new study claims that a unique Buddhist statue nabbed by Nazis in the ’30s came from space … kinda.

The statue, known as the “iron man” (pictured above) for the high iron content of the rock it’s made from, is believed to depict the Buddhist deity Vaisravana. The 9.4-inch-tall sculpture is estimated to date back to the 11th-century Bon culture, and was likely brought to Germany by a Nazi expedition that traveled to Tibet in 1938 and ’39, probably because the Nazis dug the swastika on the statue’s chest (remember, Hitler didn’t create that).

That’s all interesting enough by itself, but things really get fascinating when we start talking about where the sculptor or sculptors got the rock for this creation. In a new paper published in Meteoritics and Planetary Science, a team of researchers from the University of Stuttgart report that their analysis of the statue reveals that it was once part of a meteorite. More specifically, the geochemistry of the rock is a match for samples from the Chinga meteorite, which is believed to have have landed on Earth in several pieces 10,000-20,000 years ago in the region that’s now the border between Mongolia and Russia.

Because the rock is very hard, and therefore “an inappropriate material for producing sculptures,” the researchers believe whoever made the sculpture knew they were working with special stuff. Though they’re not exactly certain when the sculpture was made, the researchers do believe it’s the only such artifact in the world to have an extraterrestrial origin.

“While the first debris was officially discovered in 1913 by gold prospectors, we believe that this individual meteorite fragment was collected many centuries before,” said team member Elmar Buchner. “The Iron Man statue is the only known illustration of a human figure to be carved into a meteorite.”