The Dulce, New Mexico Base

connects with the underground network of tunnels which honeycombs our planet, and the lower levels of this base are allegedly under the control of Inner Earth beings or Aliens. This base is connected to Los Alamos research facilities via an underground “tube-shuttle.” (It can be assumed that such a shuttle way would be a straight-line construction. It should then be possible, by using maps and some deduction, to determine the most likely location of this base, especially since the general location is already known.) Beginning in 1947, a road was built near the Dulce Base, under the cover of a lumber company. No lumber was ever hauled, and the road was later destroyed. Navajo Dam is the Dulce Base’s main source of power, though a second source is in El Vado (which is also another entrance). (Note: The above facts should also help to locate the base.) Most of the lakes near Dulce were made via government grants “for” the Indians. (Note: The September, 1983 issue of Omni (Pg. 80) has a color drawing of ‘The Subterrene,’ the Los Alamos nuclear-powered tunnel machine that burrows through the rock, deep underground, by heating whatever stone it encounters into molten rock, which cools after the Subterrene has moved on. The result is a tunnel with a smooth, glazing lining.)” (Note: Where would the molten rock go? And what has been done with this concept since 1983?)

Bechtel (BECK-tul) is a super secret international corporate octopus, founded in 1898. Some say the firm is really a ‘Shadow Government’s working arm of the CIA. It is the largest Construction and Engineering outfit in the U.S.A and the World (and some say, beyond).” “The most important posts in U.S.A. Government are held by former Bechtel Officers. There are over 100 Secret Exits near and around Dulce. Many around Archuleta Mesa, others to the source around Dulce Lake and even as far east as Lindrich. Deep sections of the Complex connect into natural Cavern Systems. (Note: The elevators, lights, and doors at Dulce Base are all magnetically controlled.)

The area around Dulce has had a high number of reported Animal Mutilations.” The researchers at Dulce Base have also abducted several people from Dulce’s civilian population and implanted devices of various types in their heads and bodies. (Note: Livermore Berkeley Labs (where?) began producing blood for the Dulce Base in the mid 1980s, and Human and Animal abductions slowed considerably. It may be worthwhile to check-out Livermore Berkeley Labs.) DELTA group (from the National Recon Group) is responsible for security of all Alien-connected projects. The DELTA symbol is a Black Triangle on a Red Background. Dulce Base’s symbol is a Delta (triangle) with the Greek Letter “Tau” (t) within it, and then the entire symbol is inverted, so the triangle points down, and the “Tau” is also inverted. Christa Tilton (was abducted and taken to Dulce Base) She is the editor of “Crux” magazine, which deals with UFOs, abductions, etc. P.O. Box 906237 Tulsa, Oklahoma (zip ?????)

A very active UFO base exists beneath Mt. Ranier. There are also said to be underground “vaults” containing records of the ancient Lemurians. (Note: F.L. Boschke wrote the book “The Unexplained” about the mysteries surrounding Mt. Ranier.) The ice cap of Mt. Ranier contains a maze of corridors and caves. In August of 1970, scientists climbed to the top of Mt. Ranier, and entered these caverns and tunnels. Evidence was found indicating that a small lake exists deep beneath the ice cap. It is possible that one could find a way to get beneath Mt. Ranier through these tunnels. The Mt. Lassen Entrance Mt. Lassen in Tehama County, California is an entrance to a large underground city. Near the foot of Mt. Lassen is a town called Manten. A man named “Ralph B. Fields” lived (lives?) there, and found the entra 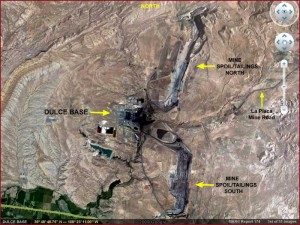 Dulce is a sleepy little town in northern New Mexico of about 900 population located above 7,000 feet on the Jicarilla Apache Indian Reservation. There is only one major motel and a few stores. It’s not a resort town and it is not bustling with activity. But, according to a few outsiders, Dulce harbors a deep, dark secret. The secret is harbored deep below the tangled brush of Archuleta Mesa. The secret is said to be a joint government-alien biogenetic laboratory designed to carry out bizarre experiments on humans and animals.

New Mexico State Police Officer Gabe Valdez was drawn into the mysteries of Dulce when called to investigate a mutilated cow in a pasture 13 miles east of Dulce on the Manual Gomez ranch. Gomez had lost four cattle to mutilations between 1976 and June 1978 when a team of investigators which included Tom Adams arrived from Paris, Texas to examine the site of the carcasses.

Curious as to how cattle were being selected by the mysterious mutilators, an interesting experiment was conducted on July 5, 1978 by Valdez, Gomez, and retired scientist Howard Burgess. They pinned up about 120 of the Gomez beef cattle and moved them through a squeeze chute under an ultraviolet light. They found a “glittery substance on the right side of the neck, the right ear, and the right leg.” Samples of the affected hides were removed as well as control samples from the same animals. Schoenfeld Clinical Laboratories in Albuquerque analyzed the samples and found significant deposits of potassium and magnesium. The potassium content was 70 times above normal.

Some investigators attribute the mutilations to aliens from UFOs. UFOs have been seen frequently around Dulce. Sightings of strange lights and other aerial phenomena have been reported in many areas where the cows have been found at the time of the reported mutilation.

On April 19, 1988, I arrived in Dulce to visit with Gabe Valdez and inquire about the sightings, the mutes, and the rumors of an underground alien base. Snow was still on the ground. I checked into the Best Western Motel and called Valdez to make an appointment to see me at 9:30 PM. I found Gabe to be a very congenial host, offering to show me around the roads of Dulce that night and point out some various locations where he had found mutilated cows or had seen strange aerial lights. He made the astounding statement that he was still seeing unidentified aircraft at the rate of one every two nights. We took a look at the Gomez Ranch, the road by the Navajo River, and the imposing Archuleta Mesa. Gabe had found landing tracks and crawler marks near the site of the mutes, and was convinced that scientist Paul Bennewitz of Thunder Scientific Labs in Albuquerque, was definitely on the right track in his attempts to locate the underground alien facility in the vicinity of Dulce. No one knew for sure where the facility was located or how humans or aliens gained secret entry to the facility.

I had first heard of Paul Bennewitz in 1980 when my friend Walter called me from Albuquerque and told me he had been working with Paul on electronic instruments. Walter informed me that Paul had not only photographed UFOs, but had established a communication link with their underground base at Dulce. Bennewitz had first come to prominence during the August, 1980, sightings over the Manzano Weapons Storage Area at Kirtland AFB. A Kirtland AFB incident report dated October 28, 1980 mentions that Bennewitz had taken film of the UFOs over Kirtland. Paul, who was president of the Thunder Scientific Labs which was adjacent to Kirtland gave a briefing in Albuquerque detailing how he had seen the aliens on a video screen. At the time, the aliens were transmitting signals to him from a base underneath Archuleta Mesa.

Researcher William Moore claims that the government agents became interested in Bennewitz’s activities and were trying to defuse him by pumping as much disinformation through him as he could absorb. Whether Paul’s communication with supposed aliens at the Dulce Base was part of this disinformation campaign is unclear. If we believe that Paul is the single source of reports on the Dulce Facility, then discounting Paul’s story and discrediting him could be a tactical maneuver. The actual disinformation maneuver would result in making the public believe there was nothing to the Dulce story.

er 7,000 feet above sea level, and is near a rock outcropping suitable for camping under.