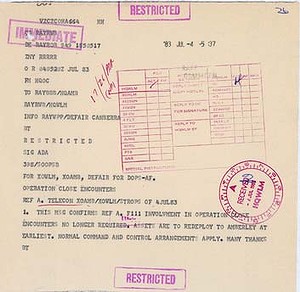 The Australian governement has just released thousands of peviously “secret” files about UFO sightings and unexplained events. The mamouth task of going through the files in detail has started, but it is clear that Australia has had more than its fair share of close encounters.

The ”X Files” which can be  viewed in Canberra also give details of other unexplained  sightings, some of which are supported by witness statements to police.

Reports in the X Files give details of  an ”unidentified physical feature”  of circles on Milo Station at Adavale, Queensland, in 1982. The file refers to  photographs that  apparently were taken, but they were not among the papers, and requests to the government for copies came back “restricted access, highly secret”.

The report details that Constable Geoffrey Russell, from the local police station, visited the site  and wrote a report for RAAF Base Amberley near Ipswich. The officer saw  depressions in the ground and thought they were caused by a motorcyclist doing  donuts but then dismissed the idea.

He wrote: ”I strongly feel this [is] no hoax even though I do not know the  cause of this ‘feature’.”

He described a  large circle of 2330mm in diameter with one inner circle of  2010mm  which were 160mm in width and about 15-20 mm deep.  The soil around the  outer circle appeared to have been ”blown away”, he said.

Other reports around that time, in Queensland, dairy farmer Robin Priebe phoned Imbil police at  5.30am in July 1983 to report seeing a strange object in the sky to the north of  the town. The papers state that a Sergeant Waterson then went to his back  verandah and saw ”a large white light with several flashing lights around it”  which did not appear to be a normal aircraft.

A similar sighting was made by Constable R. Keys from a separate position. He  was also of the opinion that it wasn’t a normal aircraft.

The only photographs in the X Files were of unusual lights over Bendigo,  witnessed by hundreds in May 1983.  An interim report by the RAAF stated that  Mike Evans, a 17-year-old disc jockey with the Bendigo radio station 3BO,  received calls from listeners, then saw the lights himself and took photos.

One anonymous caller to the RAAF said the lights were caused by a rock group  experimenting with laser lighting.  The report said they were probably caused by  train headlights or lasers or from planets or stars. There had been unusual  weather atmospherics on the night. 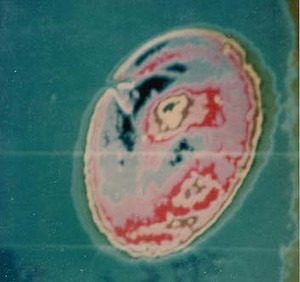