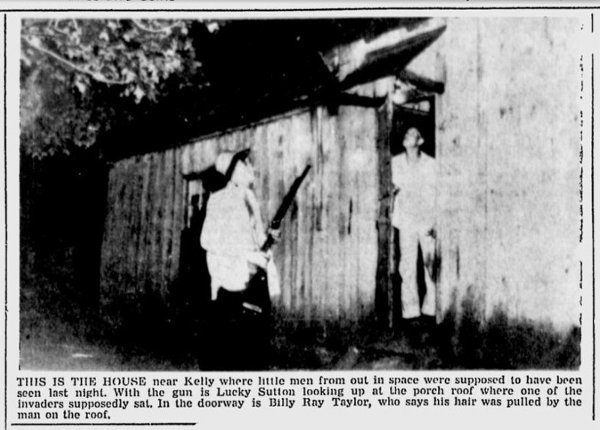 On the night of August 21, 1955, during the heyday of flying-saucer reports, a western Kentucky family encountered humanoid-like creatures that terrified them at the family farmhouse.

Not all of the eleven were eyewitnesses to the most significant events. One of the women, apparently June Taylor, had been “too frightened to look” (Davis and Bloecher 1978, 14), and Lonnie Lankford (2005), speaking to me at age 62, said that, during the fracas, his mother had hidden him and his brother and sister under a bed.

About seven o’clock, Billy Ray Taylor was drawing water from the well when he saw a bright light streak across the sky and disappear beyond a tree line some distance from the house. According to researcher Isabel Davis, who investigated the case in 1956 (Davis and Bloecher 1978, 15), Billy Ray Taylor was different from the other eyewitnesses:

He had looked at the creatures with extravagant success. He was the only member of the group who appeared to arouse immediate doubt in everyone who talked to him. . . . Even among the family he had a low standing; when he first came into the house and reported a “spaceship,” they paid him no attention. Later, during the investigations, he basked in the limelight of publicity. He elaborated and embroidered his description of the creatures (though not his description of the “spaceship”) and eventually produced the most imaginative and least credible of the little-men sketches. Several skeptics who labeled the story a hoax referred to him as the probable originator. His behavior was in sharp contrast to that of the other witnesses, none of whom aroused such prompt suspicion in the investigators.

About an hour after Taylor reported his “flying saucer” sighting, a barking dog attracted him and “Lucky” Sutton outside. Spotting a creature, they darted into the house for a .22 rifle and shotgun, thus beginning a series of encounters that spanned the next three hours. Sometimes, the men fired at a scary face that appeared at a window; sometimes, they went outside, whereupon, on one occasion, Taylor’s hair was grabbed by a huge, clawlike hand. Once, the pair shot at a little creature that was on the roof and at another “in a nearby tree” that then “floated” to the ground. Either the creatures were impervious to gun blasts or the men’s aim was poor, since no creature was killed.

After a lull in the “battle,” everyone piled into their cars and drove eight miles south to Hopkinsville’s police headquarters. Soon, more than a dozen officers—from city, county, and state law-enforcement agencies—had converged on the site. Their search yielded nothing, apart from a hole in a window screen. There were “no tracks of ‘little men,’ nor was there any mark indicating anything had landed at the described spot behind the house.” By the following day, reportedly, the U.S. Air Force was involved ([Dorris] 1955) but ultimately listed the case as “unidentified” (Clark 1998).