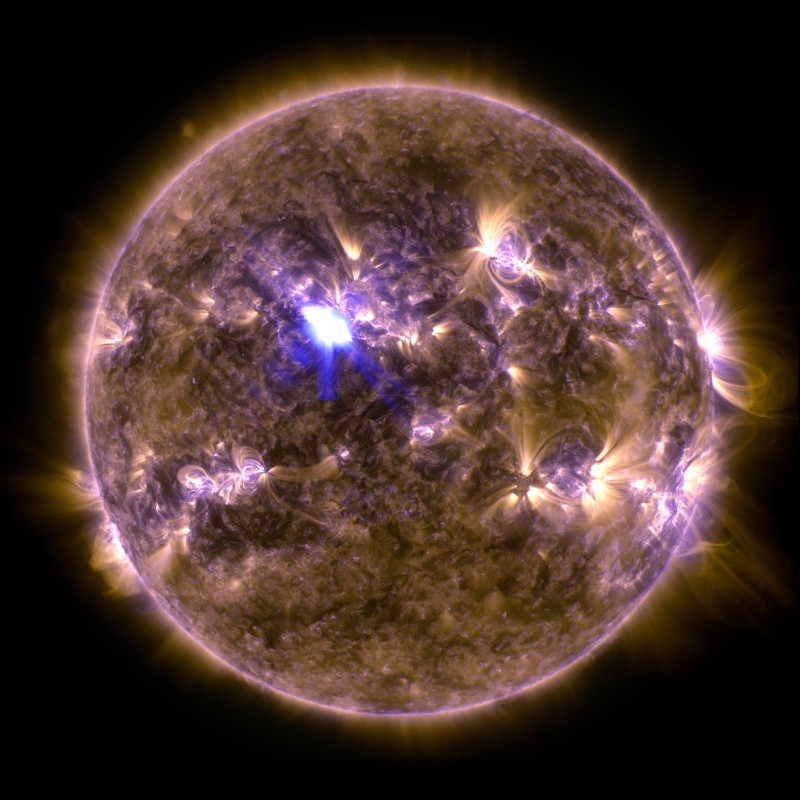 Solar flares are powerful bursts of radiation. Harmful radiation from a flare cannot pass through Earth’s atmosphere to physically affect humans on the ground, however — when intense enough — they can disturb the atmosphere in the layer where GPS and communications signals travel. This disrupts the radio signals for as long as the flare is ongoing, anywhere from minutes to hours.

This flare is classified as an M6.5 flare, some ten times less powerful than the strongest flares, which are labeled X-class flares. M-class flares are the weakest flares that can still cause some space weather effects near Earth. This flare produced a radio blackout that has since subsided. The blackout was categorized as an R2 on a scale between R1 and R5 on NOAA’s space weather scales.

This is the strongest flare seen so far in 2013. Increased numbers of flares are quite common at the moment, since the sun’s normal 11-year activity cycle is ramping up toward solar maximum, which is expected in late 2013. Humans have tracked this solar cycle continuously since it was discovered, and it is normal for there to be many flares a day during the sun’s peak activity. 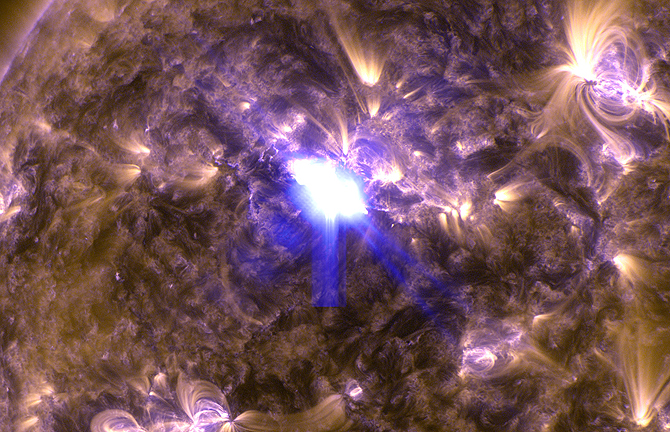 The strongest solar flare so far in 2013, accompanied by a coronal mass ejection (CME) headed toward planet Earth. A false-color composite image in extreme ultraviolet light from the Solar Dynamics Observatory captures the moment, recorded on April 11 at 0711 UTC. The flash, a moderate, M6.5 class flare erupting from active region AR 11719, is near the center of the solar disk. Other active regions, areas of intense magnetic fields seen as sunspot groups in visible light, mottle the surface as the solar maximum approaches. Loops and arcs of glowing plasma trace the active regions’ magnetic field lines. A massive cloud of energetic, charged particles, the CME will impact the Earth’s magnetosphere by this weekend and skywatchers should be on the alert for auroral displays. 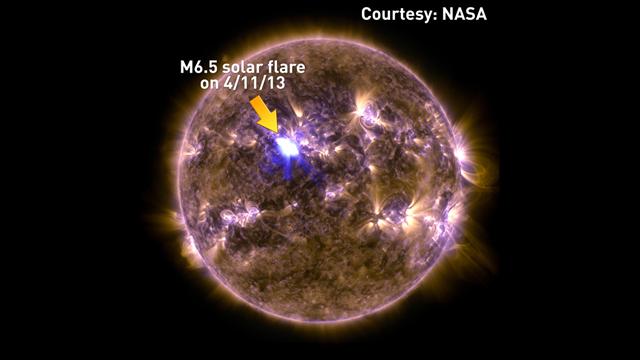 This flare is classified as an M5.7-class flare. M-class flares are the weakest flares that can still cause some space weather effects near Earth. Increased numbers of flares are quite common at the moment, as the sun’s normal 11-year activity cycle is ramping up toward solar maximum, which is expected in late 20 13. 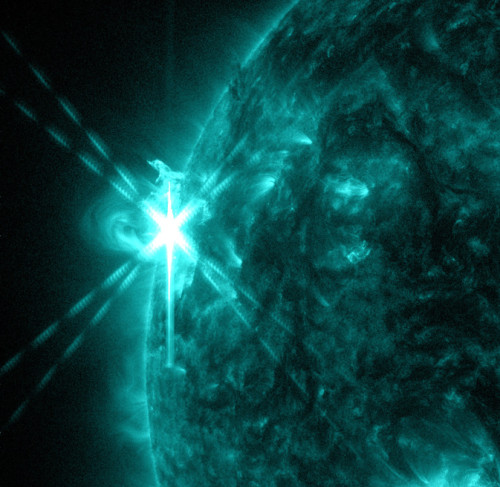 A solar flare is an intense burst of radiation coming from the release of magnetic energy associated with sunspots. Flares are our solar system’s largest explosive events. They are seen as bright areas on the sun and they can last from minutes to hours. We typically see a solar flare by the photons (or light) it releases, at most every wavelength of the spectrum. The primary ways we monitor flares are in x-rays and optical light. Flares are also sites where particles (electrons, protons, and heavier particles) are accelerated.

The frequency of flares coincides with the Sun’s eleven year cycle. When the solar cycle is at a minimum, active regions are small and rare and few solar flares are detected. These increase in number as the Sun approaches the maximum part of its cycle. The Sun will reach its next maximum in the year 2011, give or take one year.

2 Major Solar Flares within 23 days…What do you think?