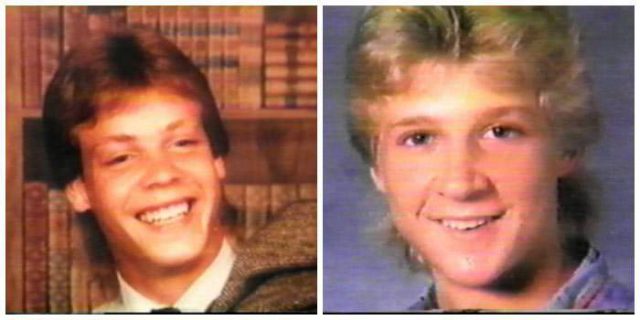 In the pre-dawn hours of August 23, 1987, a 6000 ton cargo train made its regular night run to Little Rock, Arkansas. The train was just over a mile long and was traveling at a speed of 52 miles per hour. The train had been riding smoothly as engineer Stephen Shroyer approached the small town of Bryant, Arkansas. Suddenly, he saw something in his path, but couldn’t tell what it was. As the train drew closer, Shroyer made the horrifying discovery that two boys were lying motionless across the railroad tracks:

“From the time that we had placed the train into an emergency position and laid down on the horn, I would estimate about three to five seconds to impact. And that may not sound like a very long period of time, but when you’re bearing down a couple of children, it’s an eternity, honestly.”

Despite the engineer’s frantic emergency stop, the weight of the heavy cargo train carried it for a full half-mile. The boys’ bodies were terribly mangled. The two victims were identified as 16-year-old Don Henry and 17-year-old Kevin Ives, best friends and popular seniors at Bryant High School. The state medical examiner said the boys had been under the influence of marijuana and he ruled the deaths accidental. Don and Kevin’s parents, however, could not accept that ruling. Larry Ives began a crusade to find out what really happened and to salvage the reputation of his son Kevin:

“Well I couldn’t believe that Kevin was knocked out on marijuana or into any kind of heavy drugs, anything like that, because I was at home a lot during the day, when Kevin come in from school and Linda was here at night and we’d never seen him in a state that he even act like he was you know spaced out or however you want to phrase it.”

Kevin and Don were typical teenage boys. They loved to work on their cars. They loved to hunt. Don was a natural comedian and Kevin was his best audience. Most weekends, the two double-dated with their girlfriends. However, on the night of Saturday, August 22, 1987, Kevin and Don met a group of friends at the commuter parking lot, a favorite gathering place for the local teenagers. Around midnight, the two boys left to go back to Don’s house. Kevin waited on the porch while Don went inside to talk with his father, Curtis Henry:

“And he came in at approximately 12:15, and told me where he was going and everything. I told him just to be careful and he took one of my spotlights with him and took his .22.”

The two boys set off to go “spotlighting,” a form of night hunting which is illegal in Arkansas. One of them would shine a light in the animal’s eyes, transfixing the prey, while the other fired. That night, the boys chose their usual hunting ground, along the railroad tracks that ran behind Don’s house. Three hours later, the train came speeding down Bryant Hill. The boys were lying exactly parallel on the tracks, their arms straight down by their sides. According to the train crew, they were partially covered by a light green tarp. Lying parallel to both of them was Don’s .22 caliber rifle. According to Stephen Shroyer, neither boy was moving:

“I started lying down on the diesel horn. And I got no reaction, none at all, not so much as a flinch. And we just… passed over them.”

What had caused the two boys to lie side by side on the railroad tracks? The State medical examiner concluded they had smoked the equivalent of 20 marijuana cigarettes. He determined that Kevin and Don had been in a deep sleep induced by the drug and had never heard the oncoming train. He ruled their death an accident. Don and Kevin’s parents would not accept the medical examiner’s conclusion. Kevin’s father Larry hired a private investigator to find out what really happened:

“Every time he would try to find out something, it seemed like he would meet resistance from different authorities… and we weren’t getting anywhere.”

Five months after their sons were killed, the boys’ parents held a press conference. They hoped to force the authorities to re-open the investigation. The day after their press conference, the investigation was officially re-opened. Newly appointed Prosecutor Richard Garrett had the boys’ bodies exhumed for a second autopsy. The doctor concluded that, together, the boys had smoked, not 20, but between one and three marijuana cigarettes. He also found evidence that one boy was already dead, and one unconscious, before the train ever hit them. A grand jury reversed the medical examiner’s original finding of accidental death and officially ruled the boys’ deaths were “probable homicides.”

Prosecutor Garrett then focused on the green tarp reported by the train crew. Neither boy owned one. Garrett wanted to know who had covered them with it, and why:

“All four of the people on the train who were able to observe the scene prior to the accident, stated that the boys were partially covered by a green tarp.”

However, police who searched the scene later denied that Engineer Shroyer had even told them about the tarp. According to Shroyer, they even questioned the tarp’s existence:

“That to me would be like questioning the existence of the boys on the track. Because what’s real is real and what’s not is not. And… it was there, as well as the boys.”

Then, another intriguing lead surfaced. One week before the boys were killed, a man wearing military fatigues was spotted near the train tracks. His behavior aroused suspicion. When police officer Danny Allen stopped to question him, the man opened fire:

“I got up from the seat. The subject was gone… we searched the area and never found the subject.”

On the same night Kevin and Don died, witnesses again reported seeing a man in military fatigues. This time he was heading down a road less than 200 yards from the spot where the boys’ bodies were found. Police, however, were unable to locate him.