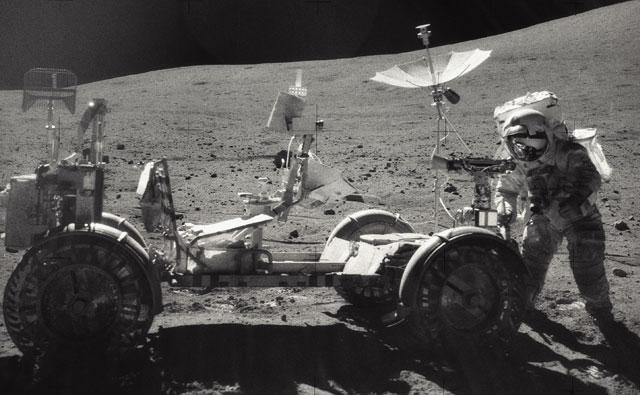 The 1957 launch of Sputnik 1, the first Earth-orbiting satellite, sparked decades of competition in space between the United States and the Soviet Union.

Whatever the motivation, missions such as Apollo 11, Venera 9, and Cassini-Huygens have helped mankind develop an ever-widening knowledge of the Solar System and beyond.
With the end of the Cold War, competition in space exploration has increasingly given way to international collaboration.

Photo: An Apollo 16 astronaut with the lunar rover (NASA)

Project Apollo, the United States’ manned Moon landing programme, culminated in 1969 with Apollo 11. Mission commander Neil Armstrong’s famous words, “That’s one small step for man, one giant leap for mankind”, spoken as he stepped onto the lunar surface, were heard by an estimated 600 million television viewers.

Armstrong, his fellow moonwalker Buzz Aldrin, and command module pilot Michael Collins later safely splashed down inside their capsule, fulfilling President John F Kennedy’s pledge to land men on the Moon and return them to Earth before the end of the decade.

A further five missions would take other three-man crews to the Moon until Apollo was cancelled in 1972. 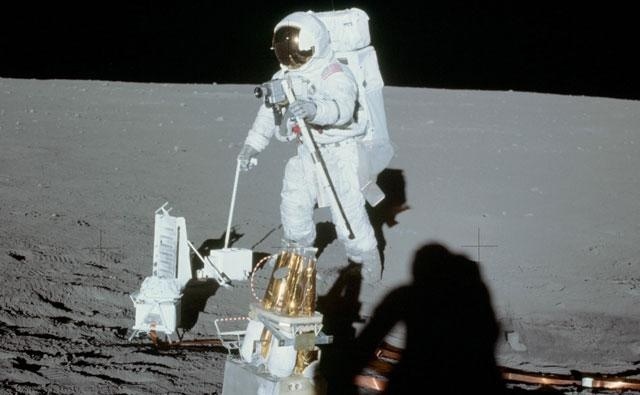 The 1969 Apollo 12 Moon mission was the second time that astronauts walked on the lunar surface.

Pete Conrad, Alan Bean and Richard Gordon flew on the mission which touched down near the earlier unmanned Surveyor 3 probe’s landing site. Conrad and Bean walked on the lunar surface and collected rock samples and pieces of the Surveyor 3 spacecraft. NASA scientists wanted to study how more than two years on the Moon had affected the probe.

The 1970 Apollo 13 mission nearly took the lives of crewmembers Jim Lovell, John Swigert and Fred Haise when an oxygen tank exploded on the way to the Moon.

For most of their hazardous journey back to Earth, the astronauts left the command module section of the spacecraft and used the lunar module as a “lifeboat”. Mission controllers and the crew battled problems such as a water shortage, extreme cold, the build-up of carbon dioxide and unplanned navigational manoeuvres.