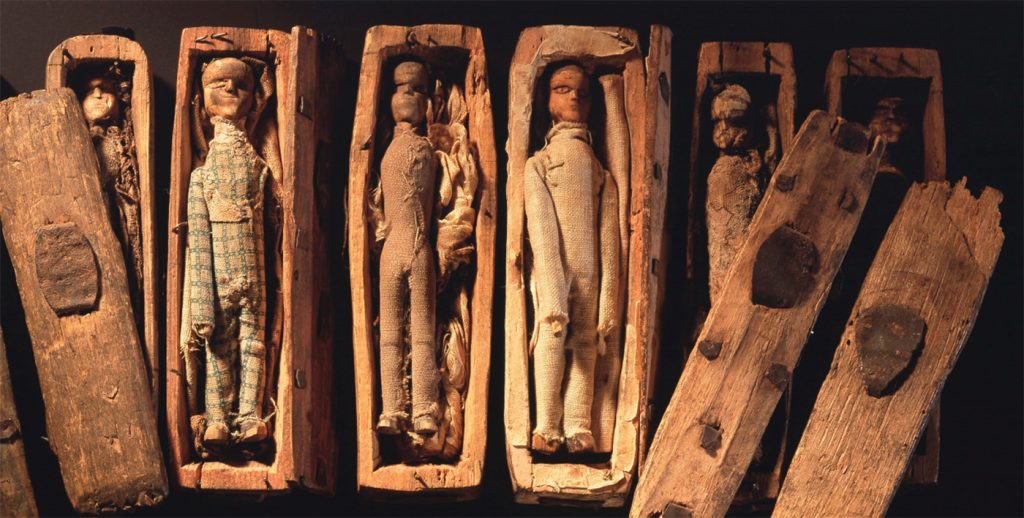 Scotland is one of the worlds most fascinating countries, full of historical myths, legends and of course mysteries. If you have never visited Scotland – you are missing out!. Scotland has an air of mystique about it, with mist-covered glens, and its beautiful hills and mountains, but it also has a darker side. These are some of the stories we discovered.

In early July 1836, three boys searching for rabbits’ burrows near Edinburgh came upon some thin sheets of slate set into the side of a cliff. On removing them, they discovered the entrance to a little cave, where they found 17 tiny coffins containing miniature wooden figures.

They were arranged in three tiers and covered by slates. Each coffin contained a small wooden figure in custom-made clothes. Nobody knows what they represented or why they were placed there. One theory is that they represented the 17 victims of the murderers and grave robbers Burke and Hare, while some believe they belonged to witches casting death spells on individuals.

In March 1866, Janet Rogers travelled to the Perthshire-based farm of her brother, William Henderson, to help with chores while he looked for a new domestic servant. Three days later she was found dead in the farm kitchen, killed by multiple blows from an axe.

The murder investigation remains the UK’s oldest unsolved murder case. Just who was the killer at Mount Stewart Farm?

When Janet Rogers was found dead in a pool of blood at her brother’s Perthshire farmhouse, detectives launched a huge investigation which has become the UK’s oldest unsolved murder mystery.

Her brother, William Henderson, had returned to Mount Stewart farmhouse outside Forgandenny near Perth; on finding no response, he climbed through a window, where he saw his sister’s body. She had been bludgeoned to death with an axe. A ploughman James Crichton was suspected of the atrocity, and after a lengthy investigation was arrested and tried in Perth, he was initially accused of committing the crime after a botched robbery, but the jury took only 12 minutes to return a verdict of not proven. 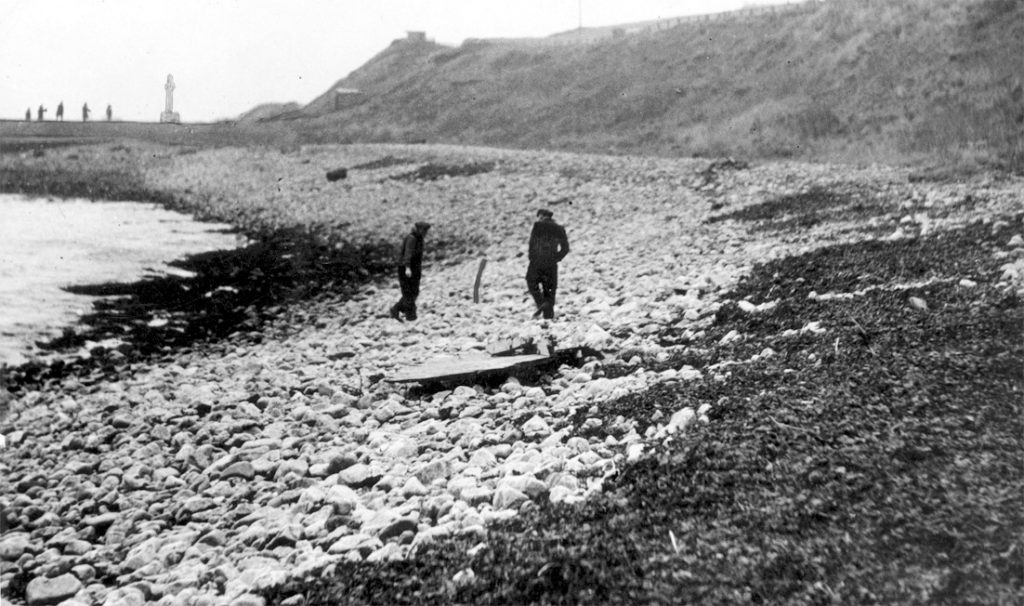 Collecting driftwood along the coastline at the entrance to Aberdeen’s busy harbour, a local man spotted something white gleaming amongst the seaweed. On closer inspection he discovered a severed human arm, tied at one end with a loop of twine. Fingerprints taken from the arm matched those of a 17-year-old local girl, Betty Hadden. Betty was known to frequent the harbour, catching the eye of visiting sailors. Extensive searches met a dead end and the rest of her remains have never been found.

Unsolved to this day, the case baffled Aberdeen City Police and had the public gripped.

Miss Hadden, had last been spotted in the company of two sailors on Castle Street on December 10 1945, and then with a group of girls shortly afterwards, but those were the last times she was ever seen.

The press at the time labelled the case “a baffling mystery”.

Miss Hadden had also been living homeless in the weeks leading up to her disappearance, which made the task of detectives all the more difficult.

After her arm was discovered, checks were carried out at hospitals yet there were no records of any female being treated for arm amputation injuries, and medical experts suggested it was unlikely she would survive such an injury without treatment.

The mysterious disappearance of the Eilean Mor lighthouse keepers.

As the lighthouse tender Hesperus sailed past Flannan Island, 20 miles west of Lewis, the lookout noticed there was no beam coming from the lighthouse. On embarking on the tiny island, the captain found an untouched meal waiting to be eaten on the table. There was no trace of the three lighthouse keepers. The superstitious suspect sea monsters, but others have concluded the men were washed off a cliff by a wave. 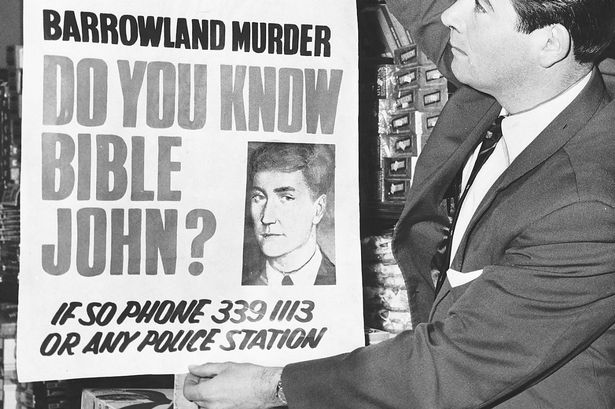 Three young women were found murdered in the streets of Glasgow in the late 1960s. All had been strangled with their own tights and raped. All were found partially clothed or naked, their handbags missing, and all had met their killer at the Barrowland Ballroom. Newspapers nicknamed the suspect Bible John after the key witness reported that he had quoted the Old Testament to one victim.

Renee MacRae and her young son, Andrew, left their Inverness home apparently to spend the weekend with her sister in Kilmarnock. A bus driver passing a remote lay-by at Dalmagarry saw flames rising from the moorland beyond and on further investigation found it to be a burning car. The vehicle was registered to Mrs MacRae but there was no sign she and her son had perished in the fire. Their disappearance is Britain’s longest-running missing persons case. 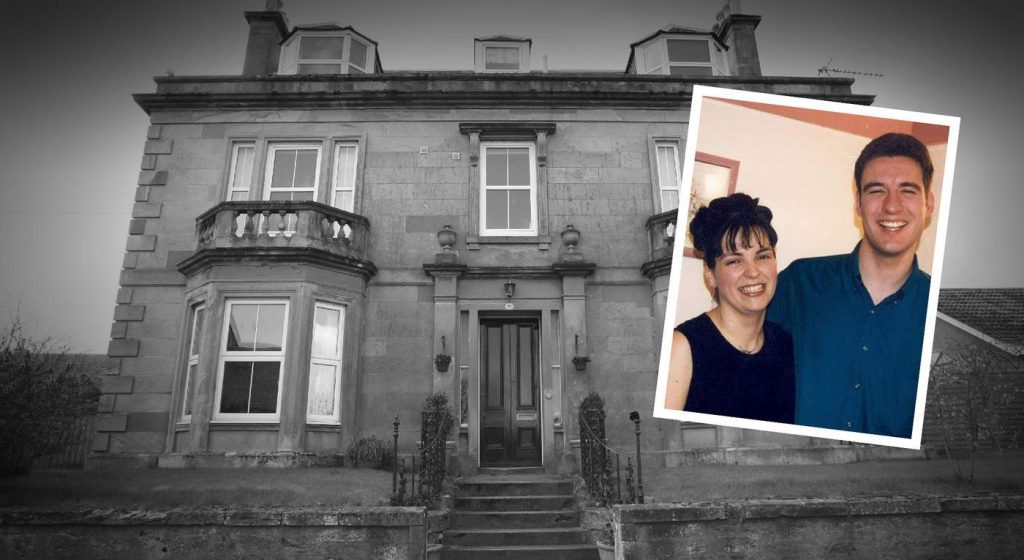 Bank manager Alistair Wilson was shot dead on the doorstep of his home in Nairn on 28 November 2004 by a stocky man wearing a baseball cap.

The police inquiry into the shooting has focused on a Haenel Suhl Model 1 Schmeisser’s patent handgun, made in Germany between 1920 and 1945, which was found down a street drain in the town. The ammunition used in the shooting was made by Sellier and Bellot in the Czech Republic between 1983 and 1993. Despite intense efforts, the police have yet to find the killer.

The Wilson family home stands in the middle of a quiet street tucked behind the main road. There are steps leading up to it and no hedges, so the front door is visible from the street. On the night of 28 November, two people standing on the opposite side of the road see two men talking at the door. They don’t see the visitor’s face. The witness remembers the stranger as white, stockily built, with a dark baseball cap pulled down over his face. She says he was clean shaven, wearing a dark blue bomber-style jacket and dark jeans. He was 35-to-40-years-old and 5ft 6ins to 5ft 10ins.

The exchange between Alistair and the man is believed to have lasted a couple of minutes during which time  the suspect had handed over a bright blue envelop, before Alistair goes back into the house, he closes the front door behind him. Alistair show the envelop to his wife, and they both looked inside to see that it was empty. Alistair insists on going back out to see if the man is still there. “There was no fear, otherwise I wouldn’t have let him go back downstairs,” his wife, Veronica is quoted as saying. The man is still standing on the doorstep. Moments later, Veronica hears a loud noise.

But what has become of the blue envelope he had been holding just minutes before he was shot? It hasn’t been seen since, and there have been no end of theories as to what part it might have played in the murder.

Why was Alistair handed the envelope and allowed to return to the safety of his house – rather than being shot when he first came to the door? Maybe the envelope was some kind of demand. Was Alistair supposed to put something in it? 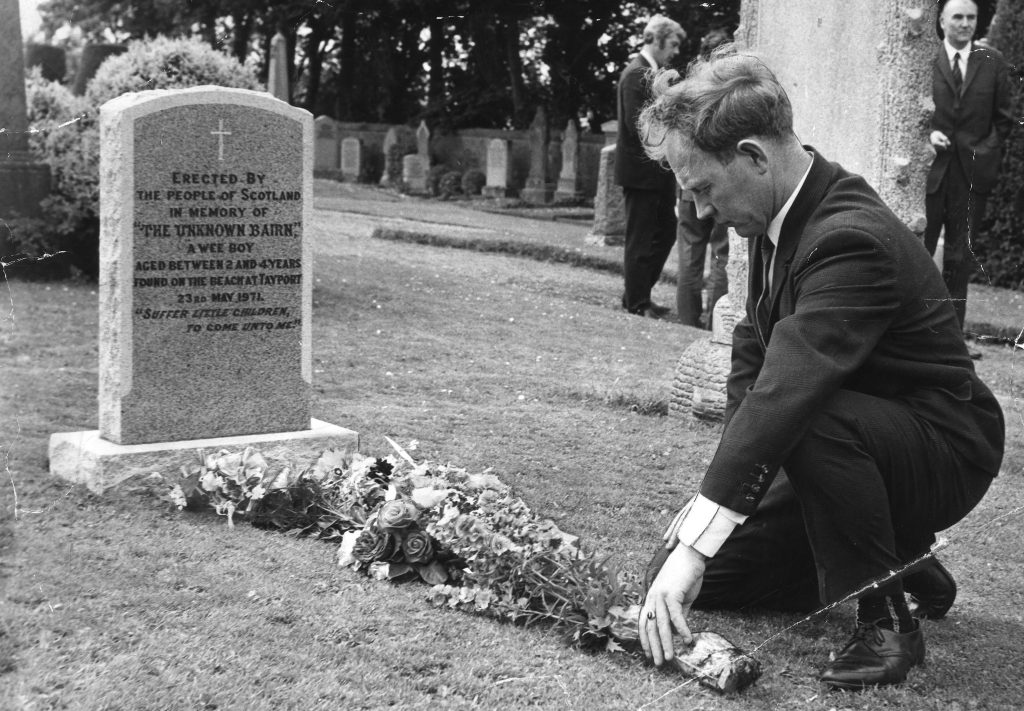 On a dull May day in 1971, a Fife postman and his son came across what they thought was a doll washed up on the beach at Tayport. It was the body of a boy aged around three, still wearing what looked like a pyjama top. Nothing suggested he had died of anything other than natural causes. Despite ongoing appeals and huge news coverage, nobody ever came forward to claim or identify the child. Numerous theories have been put forward, including that his family were unable to meet the costs of a funeral, or had been aboard a ship visiting the Tay. The people of Tayport raised money and he was buried in the village, where community representatives pay their respects once a year. His headstone reads: ‘Erected by the people of Scotland in memory of the Unknown Bairn’. 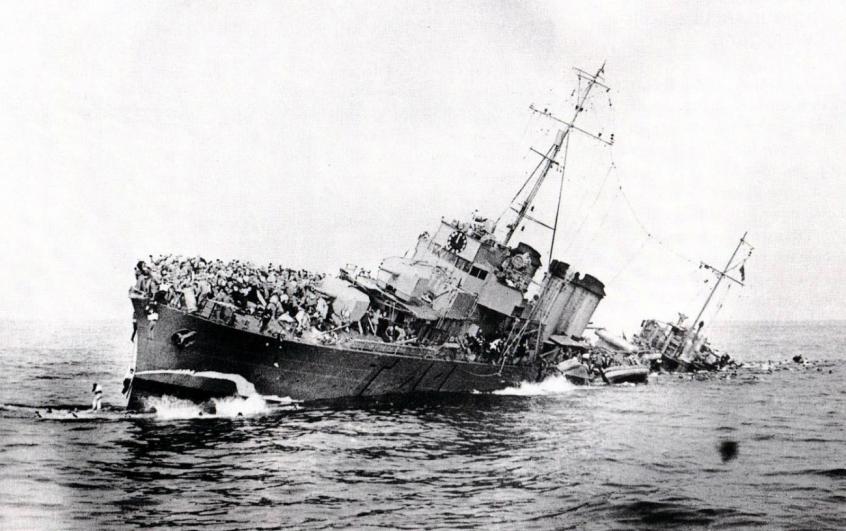 On 30 April 1940 a French warship, the Maille Brézé, was anchored off Greenock. For some unknown reason, a torpedo tube on board malfunctioned, launching a torpedo on the ship’s deck. Fuel tanks were set ablaze but did not explode. The crew abandoned ship but many sailors were trapped in the mess hall. A local doctor made the tough decision to administer morphine to the trapped sailors through the ship’s portholes to make their certain deaths less painful. No one knows why the torpedo tube malfunctioned that day.

On the seabed off Drumbeg in Sutherland lies an unknown wreck site. Three cannons and a wooden hull remain, but archaeologists have failed to find out the story behind the sunken ship. Local fishermen have known of the wreck since the 1990s but there are no historical records of a ship going down here. One theory is that the vessel was owned by the Dutch East India Company, which collapsed in 1799. Researchers have suggested some or all of the crew may have survived, but no links have been traced.

he Loch Ness Monster, AKA Nessie  is a cryptid in cryptozoology and Scottish folklore that is said to inhabit Loch Ness in the Scottish Highlands. It is often described as large, long-necked, and with one or more humps protruding from the water. Popular interest and belief in the creature have varied since it was brought to worldwide attention in 1933. Evidence of its existence is anecdotal, with a number of disputed photographs and sonar readings.